It would be nice to have a mode called "Temporarily Suspend" that disables the current mode for a set period of time (30 min, 1 hr, 2 hr, etc).  This would allow a user to turn off all cameras but they would automatically return to the previous mode after the set period of time.

I’m still frustrated with this nonsense!

This happens AT LEAST 2 times a week for me when I go to do yard work (mowing, watering, etc).  It's so very annoying to me to have to manually disable and manually enable.  I will be the first to admit I have a forgetful mind. I have so much going on that I am always thinking about the next project and for my camera to automatically resume recording/alerts after X amount of minutes would be perfect.  Even if I can pick incremental times, I would be fine with this... so long as they are realistic intervals and not under an hour.

Definitely a new feature that I need.

yes this would be a great feature and I actually got on this site to suggest this exact thing.

I'm very happy with my Arlo system  - 6 cameras humming along giving me instant access to what's going on outside my home.  I have a schedule setup so that it is armed during the hours when I am typically away, and also at night.  I don't like to use Geofencing because I'm not the only one coming and going from the house, and often I still want the cameras armed even when I'm home to alert me of anything going on outside.  It would be nice to have some sort of egg timer or temporary sleep mode where I could supress notification or disarm the system alltogether for a specified amount of time (30 minutes, 1 hour, 2 hours) and then the system would automatically go back into an armed state after the specified time is up.  Right now if we go outside during a time when the system is currently armed, I disarm it manually to keep my phone from blowing up.  Often I forget to rearm it when we've settled in for the evening.

I would like to have a motion timeout setting.

So I could have the camera record for example 1 minute after motion have stopped.

What happens currently is that the camera starts recording due to that someone have stepped into the camera range. Then the person stops and just to minor movements, less than the movement threshold. So the recording stops. And then a new recording start after the person moves again.

I would rather have one recording, capturing everything - instead of two and missing the minor movements.

So, a setting for a motion timeout - from the default 5-10 seconds to 30 seconds or a minute would be very useful.

when going out to water my yard for example, I disarm the system to avoid wasting batteries on dozens of recordings.

but thewn I sometimes forget to put it back on;

I would love a feature in Disarm mode where I could disarm for n minutes; (then auto switch back to schedule)

Today is Primary Election day and my kids are home from school.   Time to hit the Arlo Mode Snooze button so that it re-arms tomorrow.   Whoa...sorry I must be stuck in an "Engineering Investigation" dream for 3 years.   @JamesC ever had this dream before? 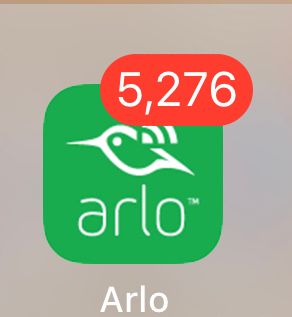 Gotta go...need to submit these videos to Arlo's "See what has been #CaughtOnArlo".

ARE YOU AN ARLO USER? SUBMIT YOUR VIDEO HERE FOR A CHANCE TO BE FEATURED!.

Many cheaper system have this and I am pretty suprised this wasn't in the Arlo app long ago.