Arlo|Smart Home Security|Wireless HD Security Cameras
× Arlo DevOps team is investigating an issue where customers are not able to login to my.arlo.com. Customers can continue using Arlo Mobile App for IOS and Android to login. We are working on resolving this issue. We apologize for the inconvenience
× Urgent: Activate Two-Step Verification Arlo requires all users to activate two-step verification to continue to access your recordings, devices, and account. Please enable this feature now. Learn More.
× We are experiencing an outage of our ReadyCloud service and are working to resolve the issue..
× We are experiencing an outage of our Google service and are working to resolve the issue..
Arlo Community
Turn on suggestions
Auto-suggest helps you quickly narrow down your search results by suggesting possible matches as you type.
Showing results for
Search instead for
Did you mean:
Join Now Sign in Help
Idea Options
21 Likes

Program post-delays for recording based on motion

Currently, when the camera is configured to start recording based on motion detection, there is a multiple second delay between when the action enters the frame and when the first frame of video is captured. Capture either also runs until the motion stops or for a fixed amount of time.

I understand it's not possible program a pre-delay beacuse the camera is battery powered and not continuously recording. Recording is triggered by another, lower-power motion sensor.

What I do want is to set a longer delay from when last motion is detected until recording stops. I've noticed recording stop while there is still interesting stuff in frame.

I dont want a fixed duration because it’s typically too long but often not long enough.

I agree that the 2 options are not sufficient. I would suggest an additional slider (similar to the timed recording) that could be checked below "until activity stops" titled "Extend activity recording" or similar from 10-120 secs. This serves to give you additional viewing if the subject wanders out of the limited infrared dectection range or out and then back into frame. Also, the recording should reset (activity + extended time) if the subject re-triggers detection while it's recording.

I want them to act like real CCTV cameras...recording is triggered on motion and continues as long as the motion is happening. Then when the scene is static, like you said, record for say 3 more seconds then stop.

We'd probably see better battery life this way as well because the cameras wouldn't be turning on and off so much. 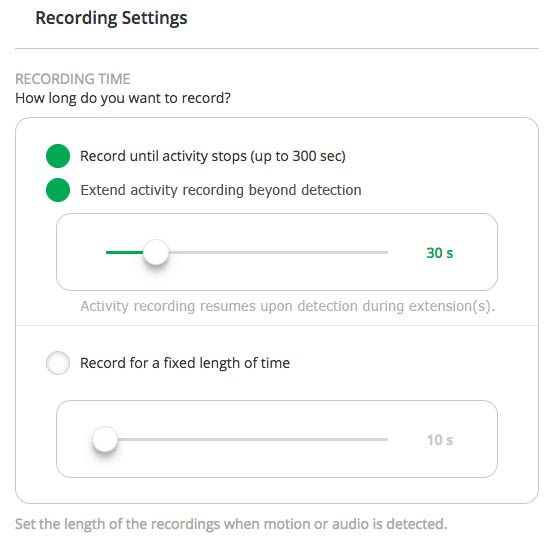 Excellent idea ! This would reduce a lot of customer complaints about the recordings stopping too soon and make the Arlo cameras that much better. I had this option on a previous Foscam camera I owned and it was very usefull.

Is there an option to begin recording with a less delay from Action?  My layout will not permit a more then 5 second delay.  many times the camera recording does not begin because the action is through the field of view to rapidly for the cameras ability to react.