Lots of times recently when I try to view my camera activity on my phone I have been getting the message, "You are not connected to the Internet. Please check your connection." There is nothing wrong with my connection. Everything but Arlo is connected. What's wrong?

This issue should now be resolved. Please make sure you have the latest version of the Arlo Mobile App v2.20.

Even with the Base Station showing OFFLINE sometimes one of my cameras is still working. Then for no reason both cameras start working and Base Station is ONLINE. my internet connection is almost twice what I'm paying for. I do have a solid green light on my Basestation even when the APP shows OFFLINE.. Go figure       Right now both cameras are not working  and my base station is offline. 5 minutes ago all was working okay..Not very reliable

Guide
I came here to ask the same question! Upgraded my whole system to Ultra. Every morning it's off when I wake up. Sometimes mid-day. NEVER had this issue with my old Pro 2 server.
View products (1)
1 Like
Message 3 of 118
11,376


Even with the Base Station showing OFFLINE sometimes one of my cameras is still working. Then for no reason both cameras start working and Base Station is ONLINE. my internet connection is almost twice what I'm paying for. I do have a solid green light on my Basestation even when the APP shows OFFLINE.. Go figure       Right now both cameras are not working  and my base station is offline. 5 minutes ago all was working okay..Not very reliable

You have titled and listed the VMB5000 smart hub that is a single light with blue and amber. Do you mean the 4000 or 4500 base that has 3 light and does have green?

Star
I am having the same issue as well. My Arlo Ultra base station (recently auto updated itself to firmware - VMB5000r4) will go Offline from the iOS iPhone app v2.19 (990) - released 8 Aug 2020 for no reason lately and it takes a while for the Base to “reconnect” and display itself on the app again.

I have performed a Base reset and reconnected all my 3 ultra cameras. The issue is still reoccurring.
View products (1)
1 Like
Message 5 of 118
11,369

I keep getting a message that the Base Station is off line.  But, it's not. This has only happened int he last couple of weeks and is constant.  Sometimes if I log off and back on, the message disappears, but then reappears a short while after.  No solution that I know of.

I'm having the same issues, plus the devices are not showing in the app, and the library tab has no recordings, even though the cameras are on, detecting motion and sending notifications

Apprentice
Yes me too as well. I go to the app and it says you are not connected for a few minutes then finally the cameras show up. Very frustrating because I need too see right then because they are security cameras. All motion detection and recordings seem to work fine though. Was there an app update gone wrong maybe?
View products (1)
1 Like
Message 8 of 118
11,390

Arlo pro models vmv 4000 on my phone when I open the application it tells me in all the cameras you device is not connected and I have internet in the house today and a speed of 250 mbps and I am connected directly to the nighthawk router. I can't see the cameras anymore Call Comcast and they say the internet is perfect. How do I solve the problem? I ask for help. No cameras. I'm blind.

When you open the Arlo app do all your devices (base included say offline/not connected to the internet)?

Is it possible to provide a screenshot of this?

Just to clarify, when you open the app all your devices are reporting offline/disconnected for a certain period of time? Is this on the Android or iOS Arlo app/Which version?

Additionally, may I ask for a screenshot of this error message if possible?

Star
I contacted support and they advised me to change my router wifi channel.
something to do with congestion.
I have done that and it appears to be working. When I launch the iOS app. The base seems to be online unlike before. I will monitor for a few more days.
View products (1)
1 Like
Message 13 of 118
11,313

Apprentice
Here is a screen shot of what it looks like for a couple minutes when first opening the app. I know it’s not a base station issue because I actually use 2 base stations with 3 cameras on each. I also have fast internet and mesh router system that is not the problem either.
View products (1)
Preview file
2360 KB
0 Likes
Message 14 of 118
11,352

I am getting a frustrating amount of intermittent "offline" notifications that has started to happen over the last few weeks.

Wifi connection is fine.  No changes have been made to the system or the internet connection.

The system just goes "offline" but still records? I get notification of movement and it records the movement even though it says on the iphone it is offline? Eventually it recovers. It seems to be random and turning the app off then on, the base station off then on and even the modem off then on does not make a difference to Arlo coming back online?

Other than this issue the system is great.

Having same issues, cameras detecting  motion and recordings show up after base shows online again anywhere from 3 - 15 mins. Unable to see live feeds until everything shows online. Customer service not helpful and have not given any updates in over a week will be returning everything back to the store as It very unreliable.

I have been having the same issue ever since the last update. 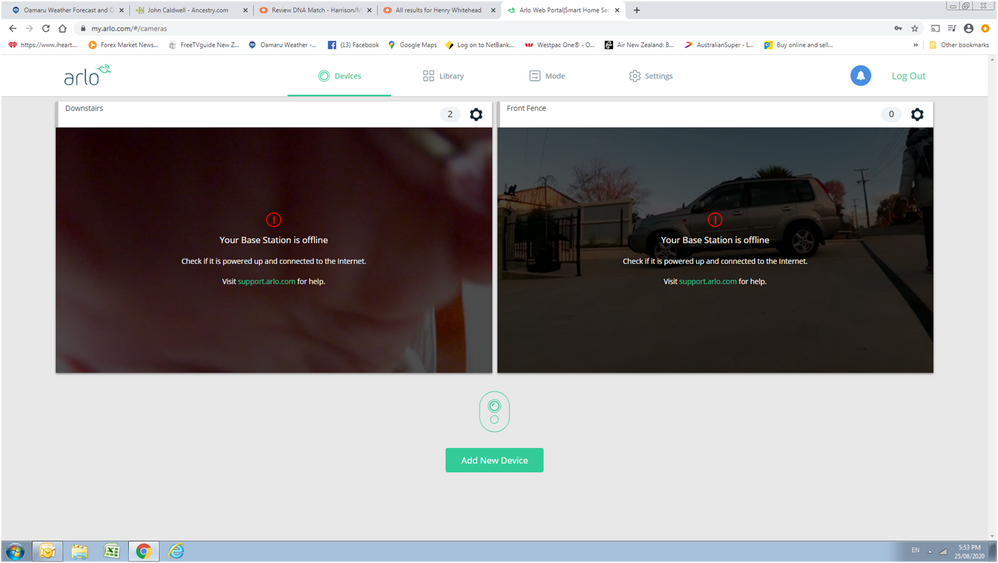 Also suffering the same problem.  Two base stations.  First one started having problems last week.  Shows the attached devices as being offline although they are not.  All activity is still recorded and available to view via the library.

Today the second base station has suffered the same problem - cameras shown as offline but still recording activity.

i have tried rebooting bases stations, re-syncing cameras (once re-synced they show as being online until I look at the live view.  Closing the live view then shows the offline message), I have changed batteries, moved the cameras closer, tried it all again.  No positive result - still offline.  I have had the system for 2 years working ok apart from all the other Netgear caused problems.  Every other device works on my Wi-Fi, so it isn’t a Wi-Fi issue.

I’m getting to the end of my time with this Arlo.  I have been recommending it to others previously but if I can’t now have live view or adjust any schedules what is the point of it?

Star
Hi there, the switching of wifi channel DID NOT work. When I log back to the iOS app, my devices are offline.
Please advise

Yes it says “Your device is not connected. Make sure it’s connected to your router and has a working internet connection”

The hub is connected to my router via LAN and internet is working.

I see everyone having same problems as I am. Customer service non existent. I contacted them over a week ago and sent follow up request nobody answers. I think If everyone  returned their system , ( that’s what I’m doing) they might improve their products.

Guide
Installed latest update today 08/25/20 and still not working right. With as many people reporting the same issue, you would think that technical support would be on top of it. Instead, the few responses from support sound like they don’t have a clue...not even an assurance that they are working on it .
View products (1)
3 Likes
Message 25 of 118
11,249
Related Labels
Discussion stats