Re: Mounting securely outside so it doesn't get stolen...

Yes, these have been up for a couple months now in a less than desirealbe area with no problems.

Tutor
Got the picture. I imagine that setup would deter camera theft. Good idea. Seriously. Now we just need a camera to monitor the camera😉
2 Likes
Reply
Message 53 of 122
40,585

Not trying to be funny, but you would be able to see who stole it if that happened...I'd recommend having it in a very high spot so it wouldn't be noticed and also be too hard to get to or get close to to see that it is magnetic...just think...would you know it was magnetic if you didn't own it!? You can always keep trying to see what or where the perfect location is by using double sided tape and a few twists and turns before attaching it permanently.

Can you share a pic of how you secured the light cage? Trying to figure out what kind of base I need to attach the wire light guard. 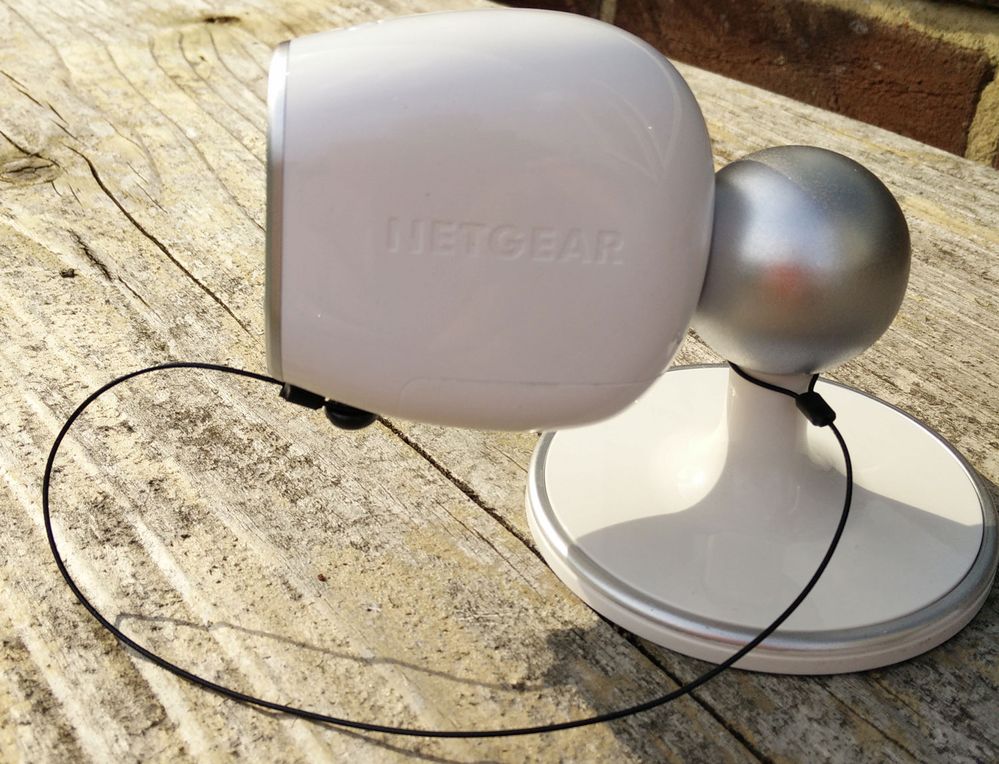 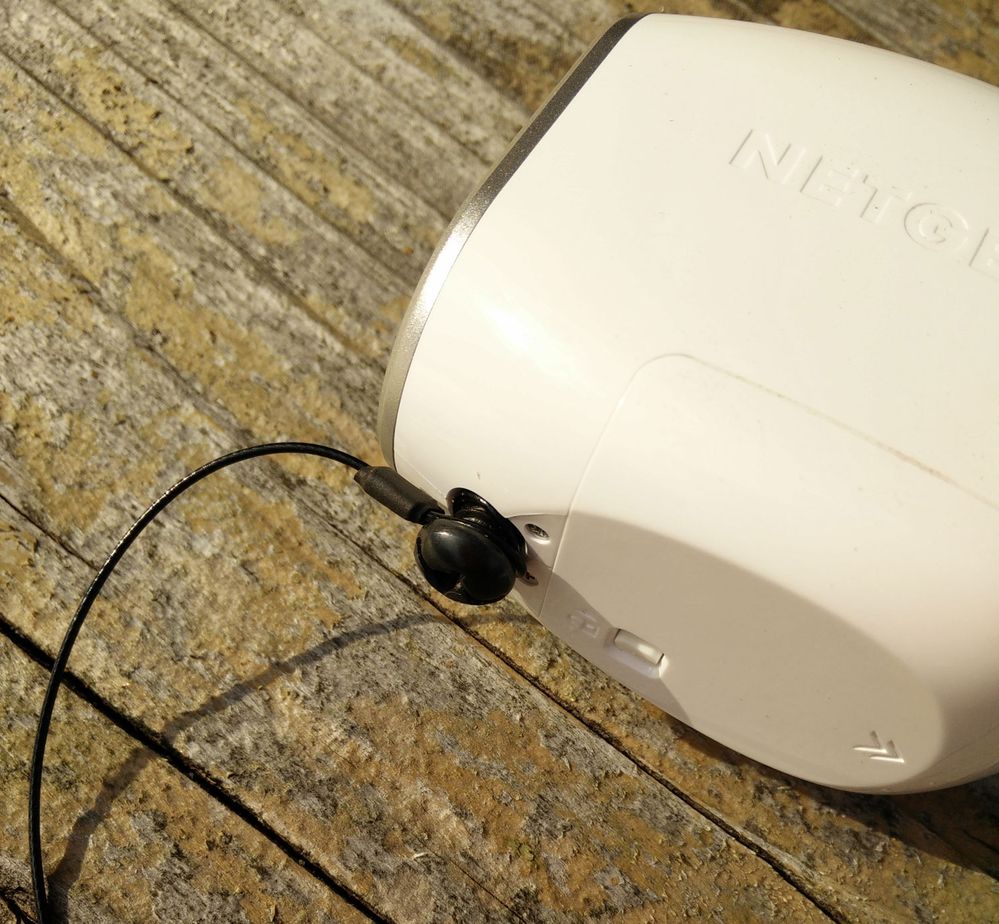 The tether is steel, sold for GoPro cameras.

I guess it's more of a visual deterrent, as anyone who knows how the mount works can just untwist it!

I'll probably cover the screw head with Sugru or similar.

A security screw would fix that too.

Great idea, what is the link to buy that?  Can you supply the site that selll this?  thanks!

Did the wire cage solution work?

Hrrm.. what length security screw for the camera + a little extra to loop a security cable through?

Thank you for the information.

i just bought a 2 camera set for my condo. I wanted one for the inside and one to watch what is happening at my front door. I have the following issues...

1.  Unless I m doing something wrong, I have been unsuccessful at getting the front door window camera to detect motion through the window. Anyone have any ideas?

2.  I live on the bottom unit if my camera so if I wanted to actually mount the front window camera outside, someone could steali it or potentially just put their hand over it after they noticed it. BUMMER. I was hoping there was some sort of wire protecting cage I could put over it that has keyed lock or dial lock like the old school bike locks so I coukd easily access the camera to replace the battery.

Hoping then that the camera would at least get a good image of them and alert me before they noticed it and/or put their hand or something else over it.

I just got the one camera system last month for testing before I invest in further cameras.

1) I learned both personally and via forums that the motion sense will *not* work through glass.  It needs to be outside to detect motion outside.  Once I put it outside (for testing), it worked quite well (~1-3 second delay in activating camera).  I have also read that a good internet connection is important to minimize this delay.  Alternatively, with the Pro system, you can plug a flash drive in and if internet is not present, it will record to the flash drive.  I wonder if you just put a big flash drive in and unplug the internet from the Arlo, whether this will eliminate the 'net' related motion delay.....

2) As with any camera, security when within reach will always be an issue.  Screwed in?  No problem, the thief could have a screwdrive.  Cable?  No problem, the thief could have wirecutters.  No one around?  Just yank! Any type of security within reach is really more of a deterrent for the casual thief.  I have wrestled with this as 2 of my locations will be within reach....so I have scoured the net for ideas and assembled a set of parts that I think will work reasonably well....  am going to put it together this weekend and see how it goes... 🙂  If it seems to work well, I'll post! 🙂


Alternatively, with the Pro system, you can plug a flash drive in and if internet is not present, it will record to the flash drive.  I wonder if you just put a big flash drive in and unplug the internet from the Arlo, whether this will eliminate the 'net' related motion delay.....

I don't think so - the video is the same as what's uploaded.  Testing would be needed.


2) As with any camera, security when within reach will always be an issue.

Well stated.  The Q cameras use pixel-based motion detection so will work through a window - just make sure to turn off the night vision switch so the IR illuminators won't reflect off the glass.  If needed, normal outdoor lighting can be used instead or consider an IR (850nM) spotlight.  The Q works well in low light so you may not need the extra lighting.

BTW, anyone stealing or covering the camera will likely have their faces videoed prior to being messed with.

Alternatively, with the Pro system, you can plug a flash drive in and if internet is not present, it will record to the flash drive.  I wonder if you just put a big flash drive in and unplug the internet from the Arlo, whether this will eliminate the 'net' related motion delay.....

I don't think so - the video is the same as what's uploaded.  Testing would be needed.

jguerdat wrote:
Yes but that doesn't address the lag issue.

I'm surprised - but as I have not tested it, I have no data with which to respond.  I don't have a clear understanding of where the 'lag' comes from.  Is it the camera communicating with the Base station?  Base station connecting to the internet?  Base station establishing Arlo Cloud connection?

Guru
I haven't actually tested it either but the videos on my thumb drive are the same as from the server. If nothing else, it's the lag caused by waking the camera from sleep.
0 Likes
Reply
Message 70 of 122
37,885

Tutor
thanks for the comments. I'm interested in seeing your outdoor mounting options. As with most condos, we have CC&R's to follow for mounting to the building. one person posted this
http://www.webstaurantstore.com/fmp-253-1232-wire-light-bulb-guard-for-hood-globe/3592531232.html

I had mentioned a custom ‘security’ option I was developing for my new Arlo camera that is mounted within reach. This is my first attempt, and I’m sure there could be improvements, but I think it satisfies me for now.

After some research, I decided to mount a plate with 3M VHB adhesive to the side of the Arlo through which I would secure a cable with a lock.  After a very helpful phone call with someone from Philadelphia Security Products, I purchased plates, cables, and weatherproof locks (bought 2 as I’ll have 2 cameras within reach, rest will be up higher out of reach). 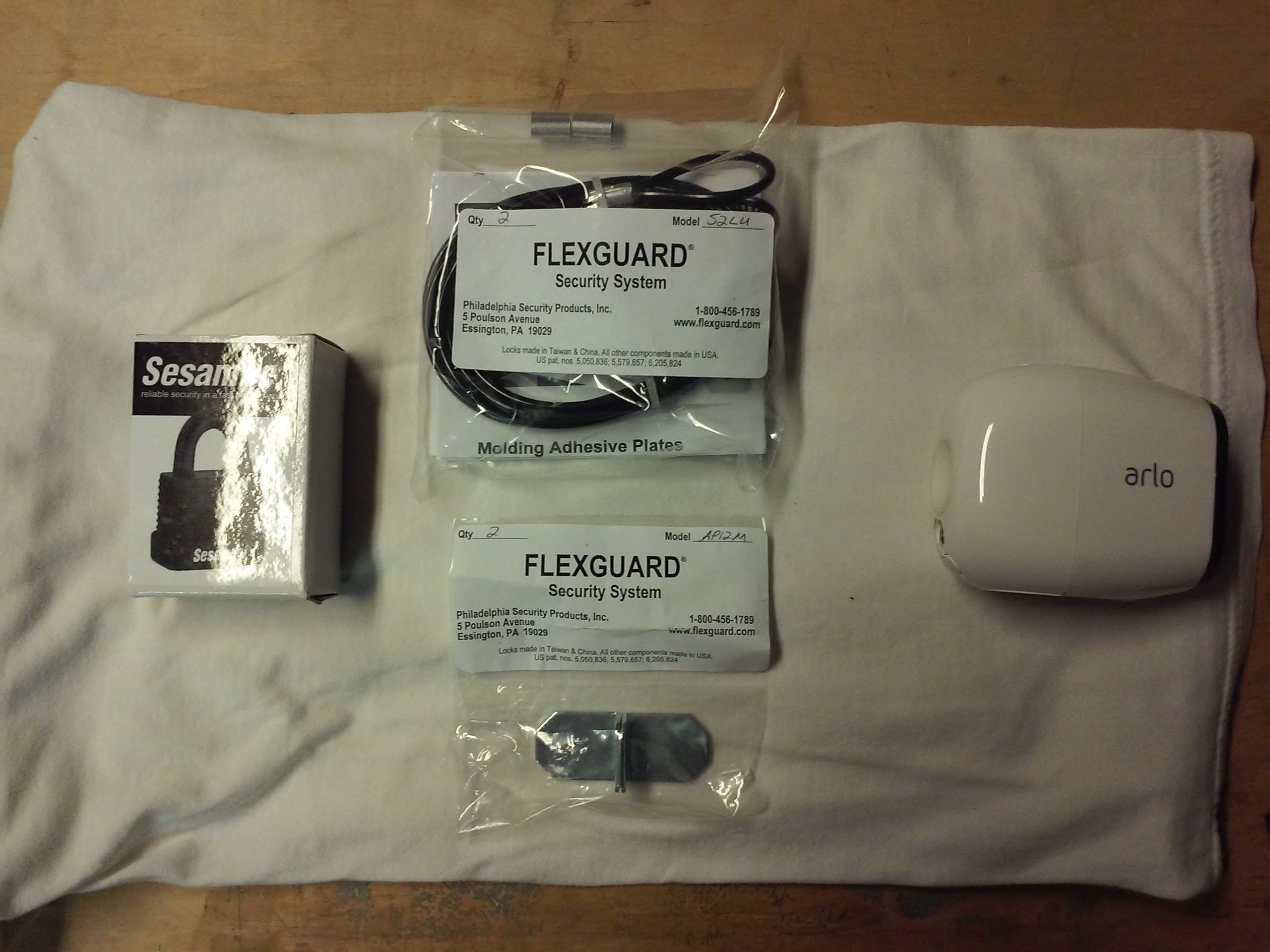 I then took my trusty dremel, cutting wheel and grinding tool to the plate as shown below. 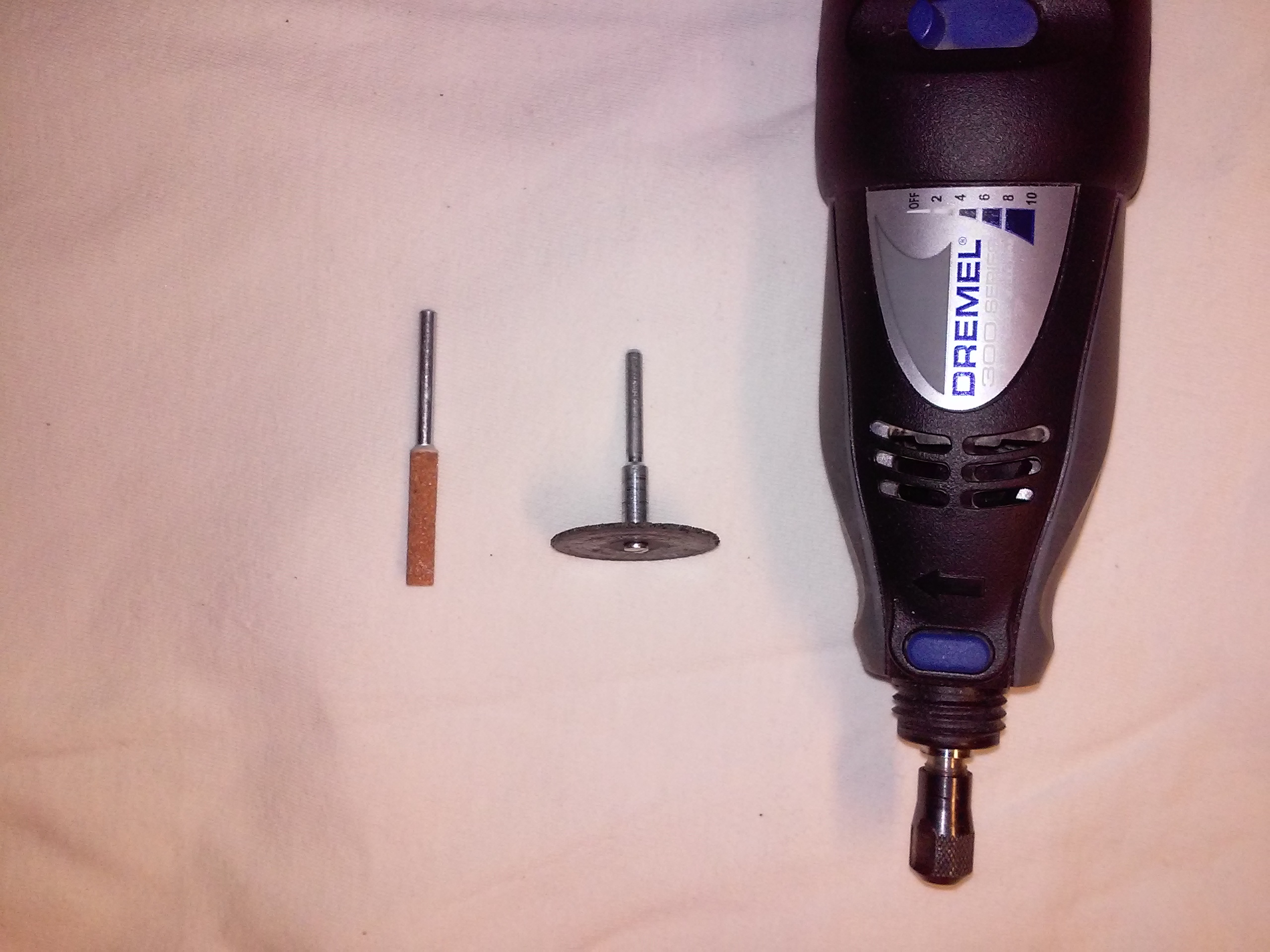 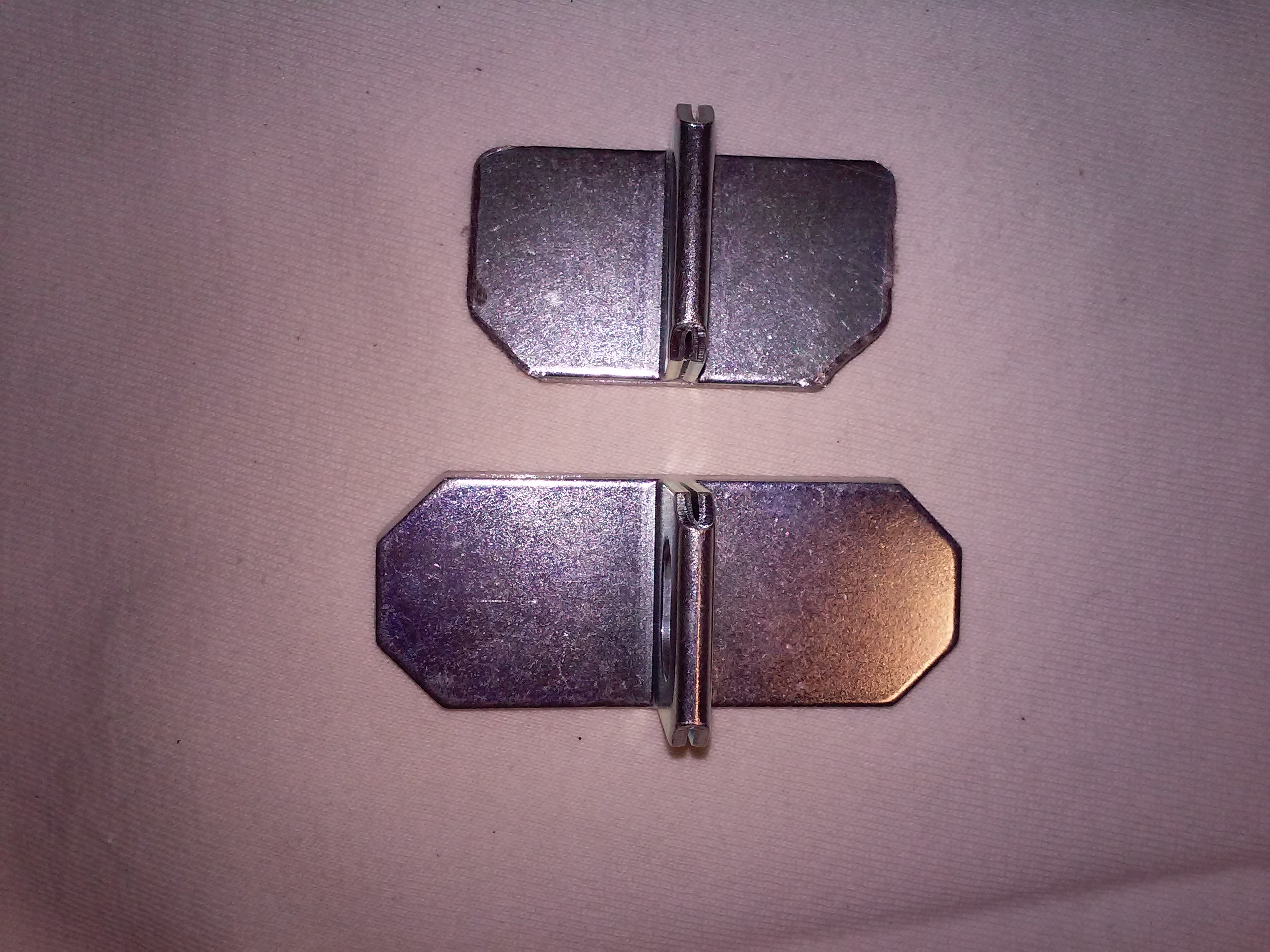 The size was cut to match the relatively flat surface on the side of the Arlo’s battery case before it starts curving.  I considered mounting to the body of the camera as opposed to the batter case, but figured if a thief/vandal was going to make the effort to rip off the battery case, then they’ll probably get it off regardless.  I then prepared the case surface with some sandpaper and cleaned it with isopropyl alcohol after scuffing of the case by following the instructions, here (or watch the video). The area I scuffed and to which the plate affixes is lightly outlined in the 2nd pic below. 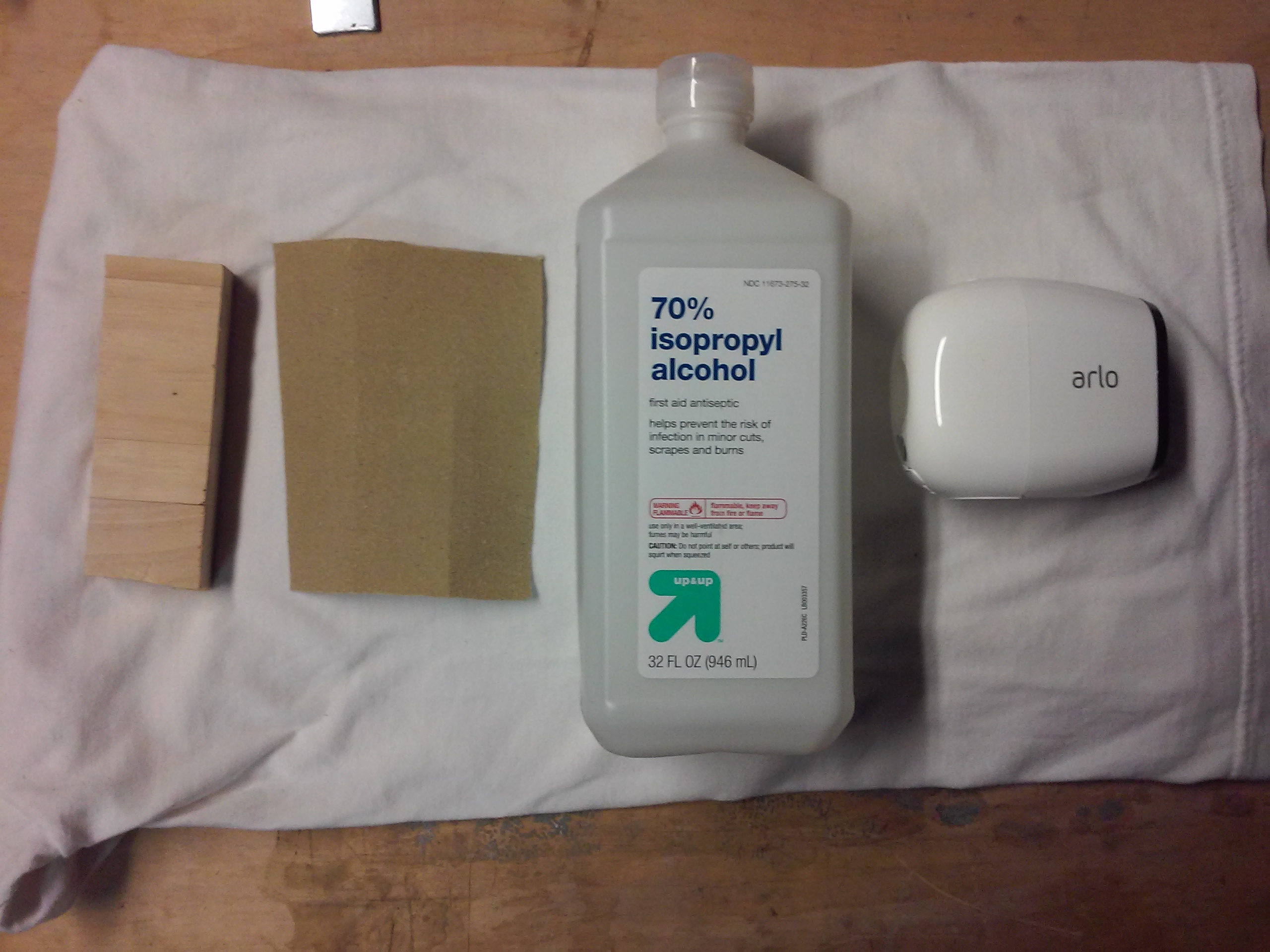 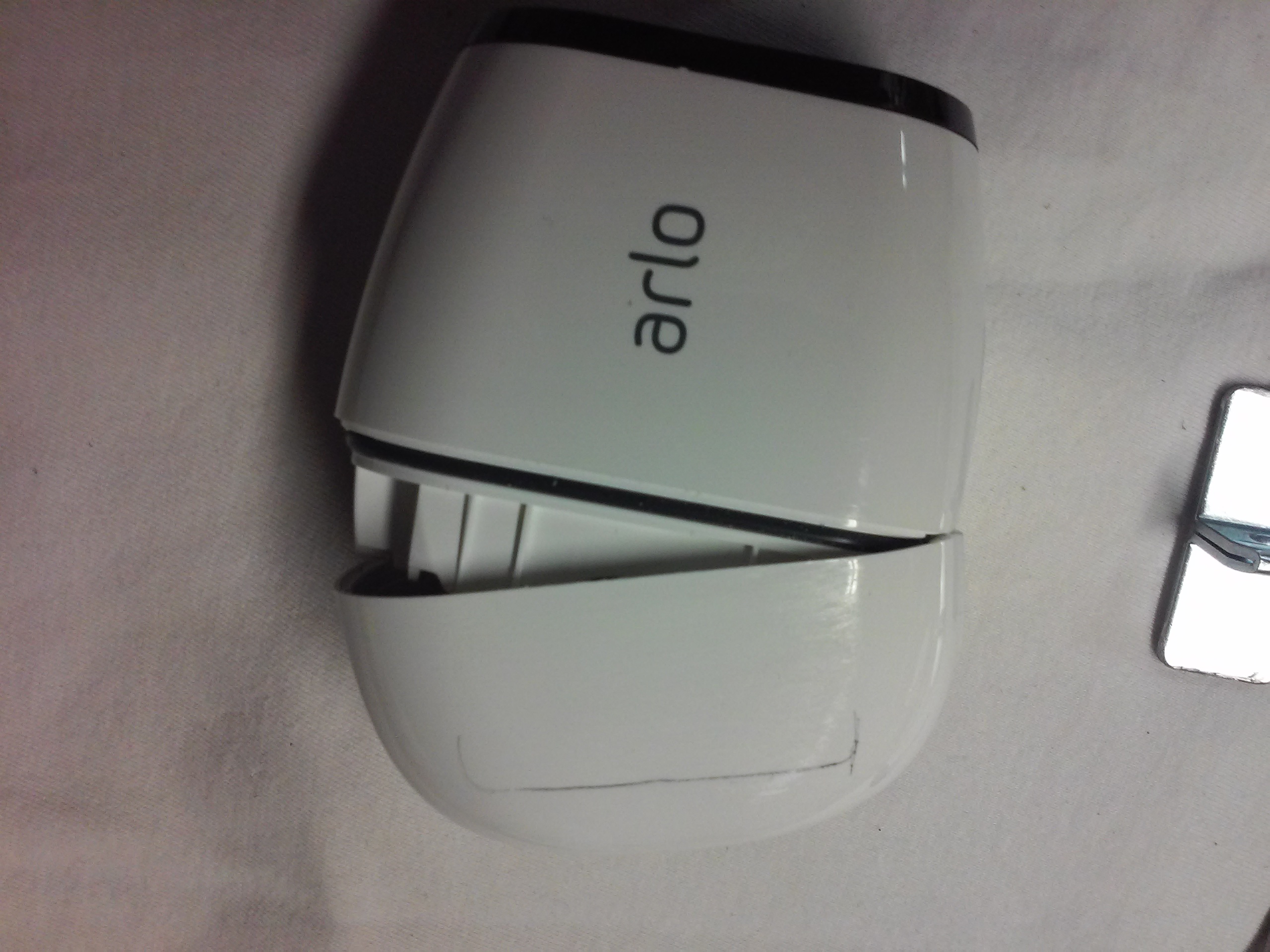 I peeled off the adhesive protective covering on the plate backing and pressed firmly to attach the plate to the Arlo camera. I then placed a couple of wood blocks on the sides of the plate against the camera with some weight above and left overnight to ensure maximum adhesion of the VHB to the Arlo camera side. 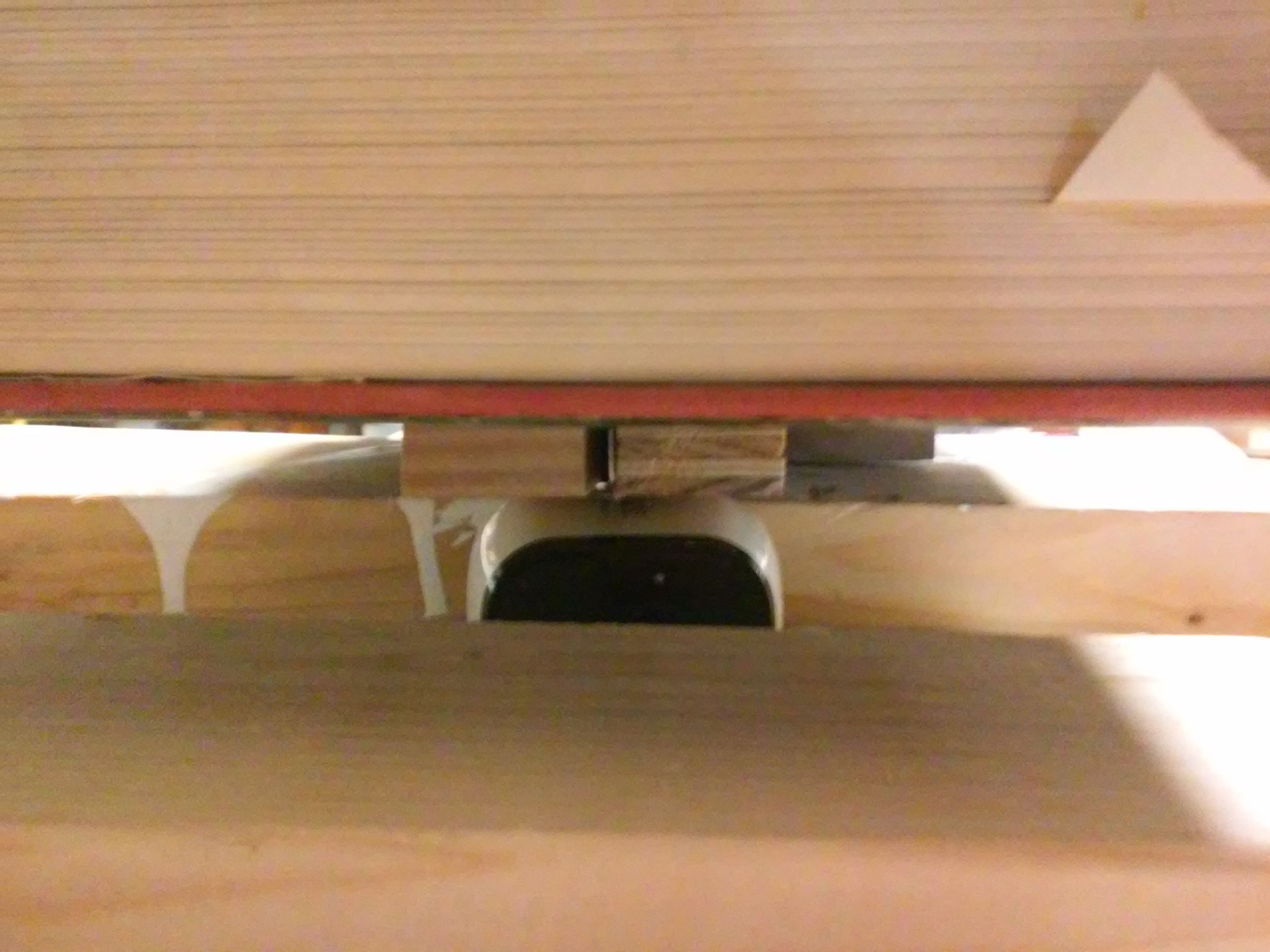 The optional skins that you can purchase for the Arlo have a handy slit in the side, into which the plates eyehole fits perfectly. 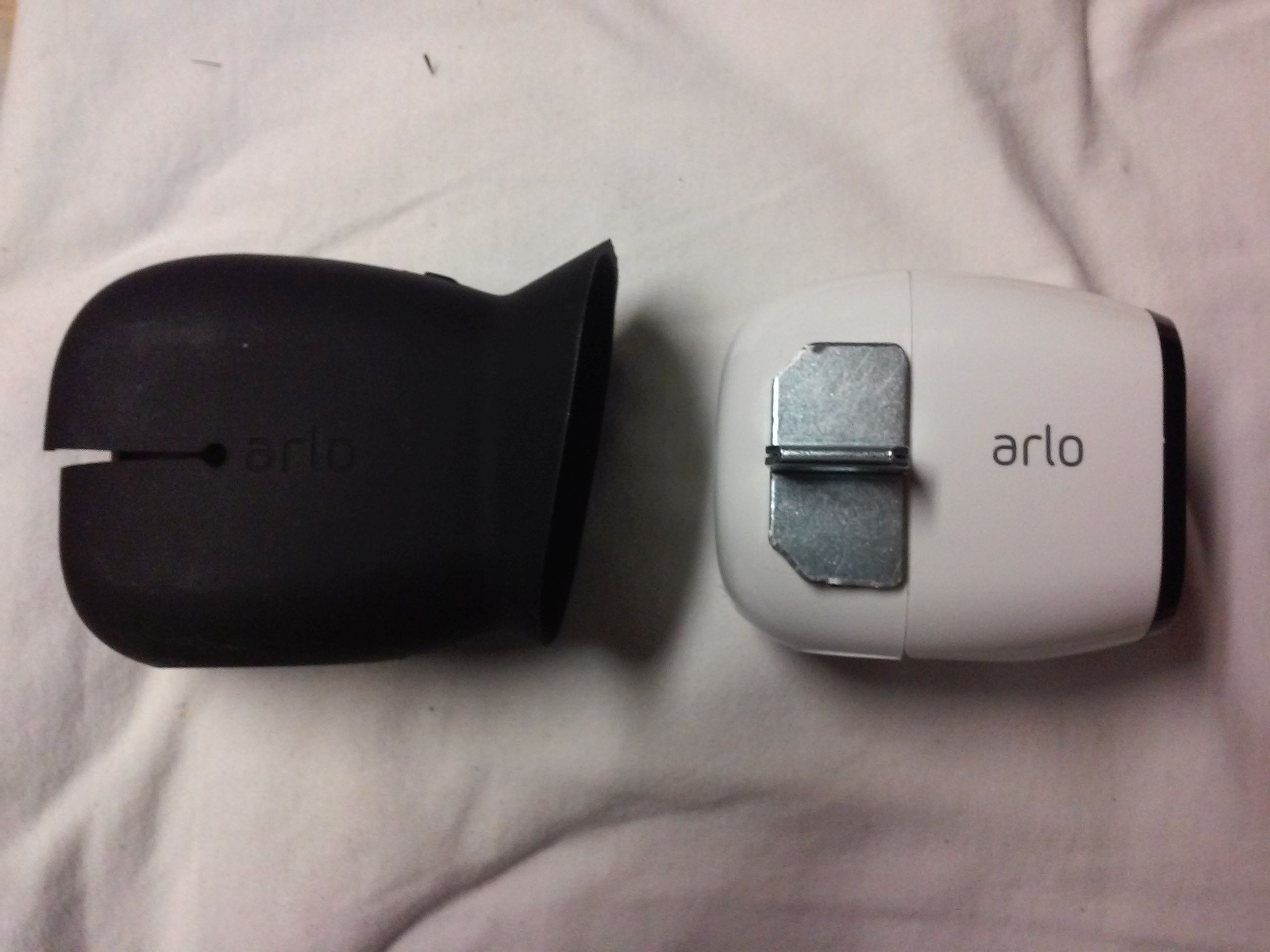 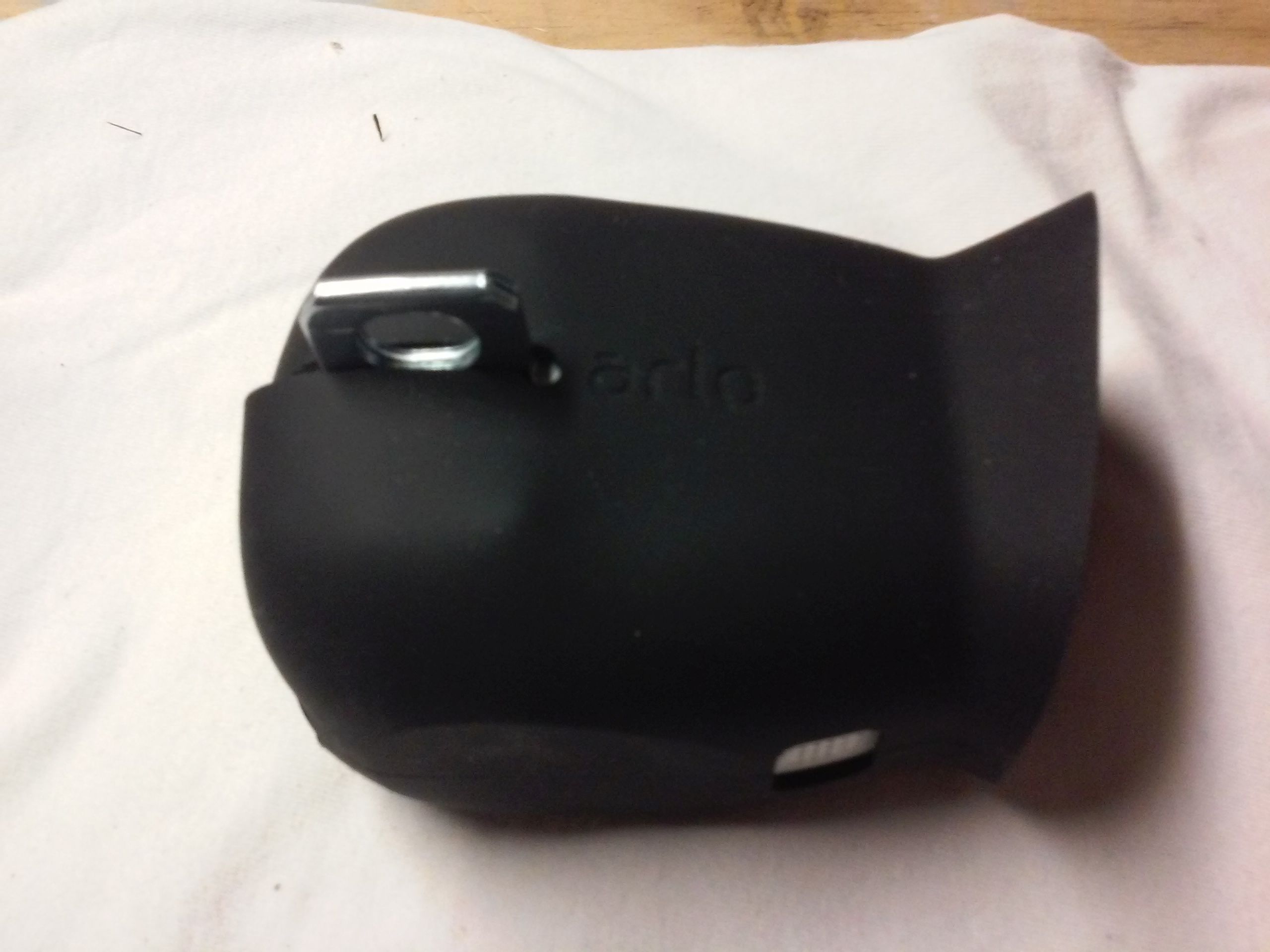 The next day, I threaded the cable through the eyehole of the now firmly attached plate, and crimped a loop on the cable end. The cable was fed through some wrought iron grating and locked on with the all-weather Sesamee 45111 lock.  Any all-weather lock will do – I got a somewhat larger one as I was not going to hang it directly on the eyehole of the plate.

Finally, I mounted the Arlo on an all-metal VideoSecu MCB1W mount ($7.50 on Amazon). 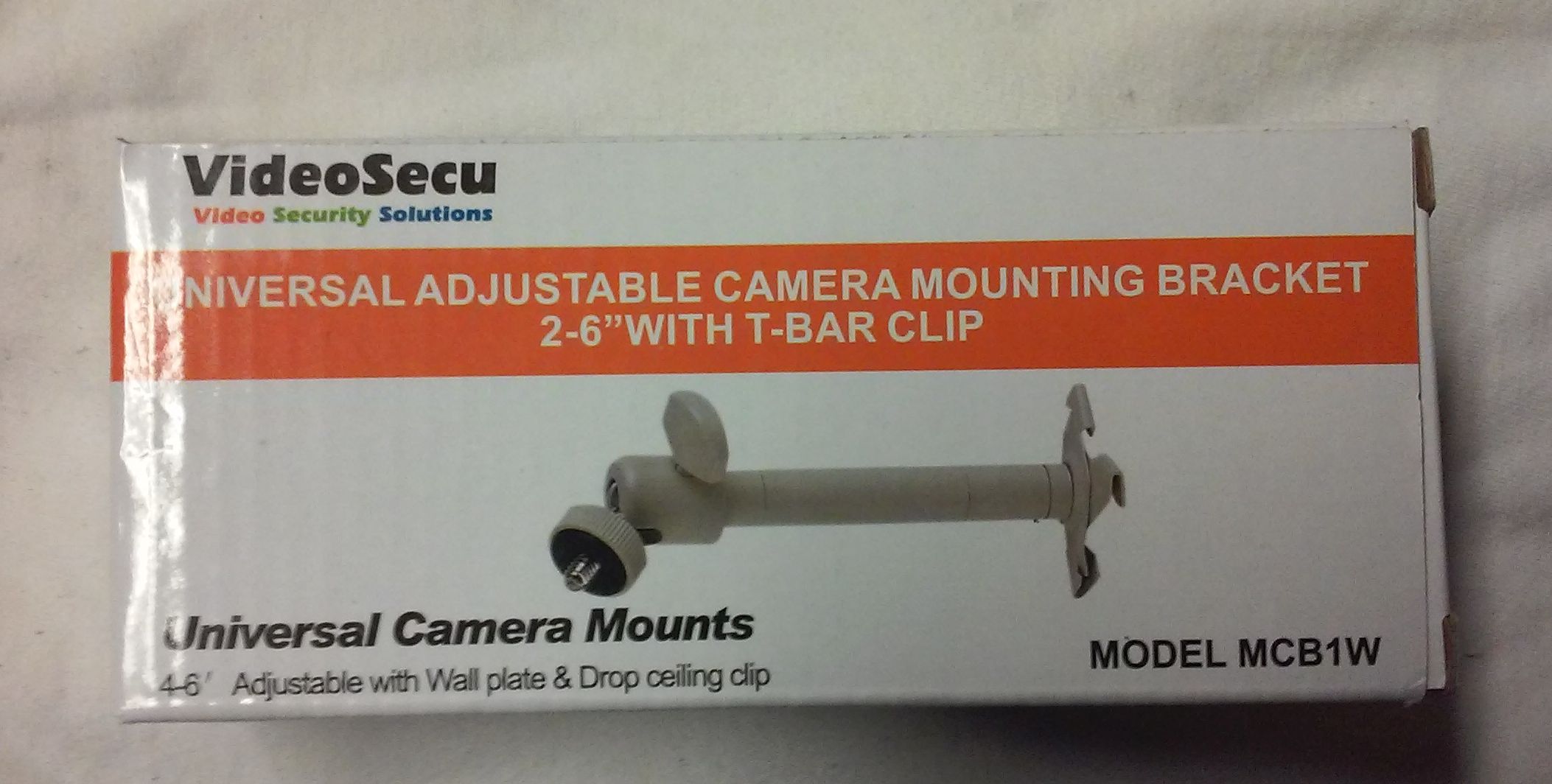 I may have to put a clear coat on that camera mount as I’m afraid it may start to rust being outdoors year-round, but for now, it worked just fine.  I like the multiple custom length fittings and the steel ball to optimally rotate and position the camera angle before securing.

Well, I’m sure there are many other (& probably better) ways of lightly securing the Arlo, but this is what I came up with first time around. Total prep time was only about an hour (mostly to Dremel the plate). If you’ve got suggestions or ideas for mounting my 2nd camera, by all means, reply and let me know!

I think this will serve as a reasonable deterrent; it won’t prevent anyone determined, but the casual thief will have a hard time getting this off.

This sounds great. Only the links we worked but not the photos, BUMMER! Could you send this to me in an email? Maybe the photos will open then.  Dying to see the final product but hard to grasp since no photos were viewable.

This sounds great. Only the links we worked but not the photos, BUMMER! Could you send this to me in an email? Maybe the photos will open then. Rarmani1@yahoo.com. Dying to see the final product but hard to grasp since no photos were viewable.

not sure why the photos won't display for you - I can see them fine on my computer...can anyone else?