Base station and alarm missing from Modes.

HW version VMB4000r3, Firmware 1.14.1.0_2909_bfcf6c2, It would appear 2909 firmware has broken the custom rule functionality. As of about 10am EDT 8/29/19 I can't change my custom record mode. Save button grayed out. One camera I only run at night stuck running all the time. Still having intermittent spells of missing recording when I know there was activity-noticing this mostly overnight and in the morning.

Also note, for quite a while now I have been able to turn recording on in my custom mode from my android app but not turn it off (even logged in as master user account). Save is grayed out. I am still unable to make any changes to the custom mode from the app at this time.

I hope this can be fixed soon.

Same issue, my android phone is stuck on getting status.

Aspirant
My device is denying the update since yesterday morning.
Techsupport asked me to wait until the nightly update routine and if the problem remains to do a factory reset.
After reading all the comments I am glad that the update routine didn't work over here and won't do a factory reset until I will read some more good news...
0 Likes
Message 54 of 154
2,010
Highlighted

Problem is not this single issue which hopefully will be resolved, problem is the lighthearted way an update is released on a security system people should rely on. @mamarcac  please stress this with the CEO.

Aspirant
After the update the other day - the base station alarm option is missing from modes.. I can no longer trigger the alarm if motion has been detected. Also the naming of the rules in the mode is screwed up... anybody else have this issue? I'm thinking of replacing Arlo with something with less trigger happy developers and who has a QA department as I think the customers are the QA with Arlo.....
Model: VMB4000 | Arlo Pro/Pro2 Base Station
0 Likes
Message 57 of 154
1,614
Highlighted

Same issue here as of today. All my custom modes are gone too!

A few of the forums mentioned sending messages to the company executives so they understand the severity of this mess.   For the sake of the company (to save it from lost business) and the customers I agree with that.

On my end I started in 2015 with the original Arlo wirefree cameras and waited as new models appeared for things to sort out.  Finally in the past year I started my migration to the Pro2 units including with the updated base stations (I have 20 cameras).   I like that the newer base stations are more responsive, have the USB storage option, and don’t need to be restarted every couple of weeks to prevent memory leak lockup that was never fixed on the prior base stations.   I also 9 Arlo lights with  3 “bridge” units.  Up until this idiotic nightmare of a firmware release everything was rock stable including well thought out modes and rules with lights triggering cameras, cameras triggering cameras and lights, etc.   While I am disappointed that I spend more time that I would like on the ladder swapping out batteries that need to be recharged all WAS good.

I am also a tech industry executive not too far from retirement  . . .so I appreciate not only the gadgets, but the software, and all the processes that go along with it.  While not trying to sound arrogant. . . .  I can clearly see the root cause on this:  management failure.   When a software release goes out with this level of disasterous multiple end user regressions it indicates not only rushed coding, but a massive void in the testing regime.   One can only say loudly: “HOW COULD SUCH A BUGGY FIRMWARE VERSION HAVE BEEN RELEASED?”   The answer of course is the management team has not taken seriously the need for professional software release quality control.

So now many, many customers that have spent a bunch of money on these systems and look to them for security of family and property have botched systems and are waiting over a holiday (in the US) weekend for a fix.   And this points to another management failure as in a situation like this the correct and respectful decision on the customers’ behalf was for management to say: “roll it back” so even if they had to push the prior release with a new rev ID, that is what they should be doing for the customers to get them back to normal while they thoroughly research the bugs in the botched version and then go through COMPLETE testing before releasing it.

So at the end of the day we can’t get upset with the folks in Arlo customer service that are doing their best to operate off scripts, and even the developers that perhaps are being rushed and don’t have a good testing team supporting them, BUT we can and should be upset with the Arlo management team in that they don’t seem to realize in this day and age of social media, online reviews, etc. that such lapses DAMAGE their company’s reputation and therefore the bottom line. Indeed even if their long term plan is more towards M&A they should realize their reputation also impacts valuation.

So let’s all start sending messages to the execs, and if they don’t fix this today (ie. Just give us back the prior firmware) then let’s get going on the review sites.  I have purchased my Arlo systems on the two largest  online retailers and if this is not fixed soon I will be updating my reviews accordingly so as to be respectful of potential customers to save them from this kind of disrespectful treatment from Arlo management.

Luminary
Totally agree, this update has the most bugs I have ever seen from Arlo. I thought it was bad before, this looks like the company is giving up completely new their products.

Roll the firmware back, quickly, then try again.

BUT TEST IT FIRST!!!

To append to my note here are the multiple regressions that should have easily been caught prior to release:

- rules and modes have disappeared on on some base stations, but not others , . . .in some cases one mode gone and in other cases all modes gone

What a mess . . . .a systems that was completely stable just two days ago is now completely useless!

Tutor
I have the same problem since today. I have 4cams pro2, this f. iOS app shows me only sound detection for 2of them and motion detection for the rest. But the motion detection doesn't work. At the app is now showing the sound detection alone and motion d. in the armed rules...why??? It even doesn't work! I restarted the base station, reinstalled the app but without the success. What's wrong now Arlo?
Model: VMB4000 | Arlo Pro/Pro2 Base Station
0 Likes
Message 63 of 154
1,619
Highlighted

Since this morning I've been unable to set the mode using my ARLO app on my mobile device. In the part when you usually check armed or disarmed it just says "gathering informaiton."

I have tried 3 different devices. Androild, iphone and ipad.

All apps and firmware are up to date.

I have uninstalled the app and rebooted the devence and reinstalled

I have tried connecting via wifi and mobile data

I have tried using a vpn

All of the above resulted in the same gatering information message

Cameras are functioning properly and I can change the mode useing the ARLO my arlo website but not on any mobile device.

Everything was functioning as it should yesterday.

Stumped. Any help much appreicated.

Here's what the CEO said for anyone interested. Personally I'll believe it when I see it.


Problem is not this single issue which hopefully will be resolved, problem is the lighthearted way an update is released on a security system people should rely on. @mamarcac  please stress this with the CEO. 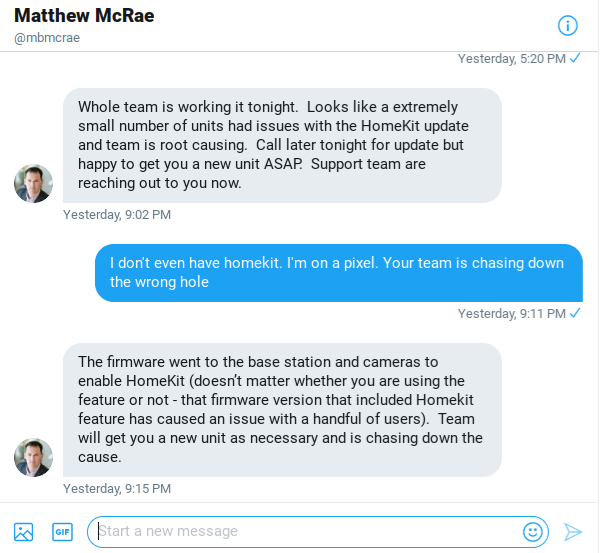 Same problem. The app otherwise appears to work. I can list the cameras and view live streams. However on the mode tab the base station just says "getting status..." and never changes. Same on multiple devices. I've tried rebooting the base station, clearing the cache, and even uninstalling and reinstalling the app, all without success.

There are prior forum posts in which people managed to solve it but without determining a specific cause. There are also posts in which Netgear says the app has a bug and to download an updated version.

This is a problem because I can't switch the mode to turn on scheduled monitoring.

Are you using the old Netgear app, or have you installed the new Arlo one that was released this week?

Well at least they havn't screwed up the Flood light Firnware, it still works. For now I am just programing each step as a seprate rule, makes for a long confusing mess but works. Could this be a marketing scheme to try and force people to subscribe? I went with Arlo for the "Free Cloud" and self monitering, Wife is in Retail and Subscription Monitering is a useless waste of money. She managed a Gun Store years ago and I used to beat the Local PD responce, most times by 20 minutes or more!

Luminary
I have the smart monitoring plan, and it messed mine up completely too.

It’s everybody, even the subscribers.

I feel like Arlo is throwing in the hat with this update and purposely pissing everybody off, probably shutting down the company and leaving us with useless hardware is next....
1 Like
Message 69 of 154
1,861
Highlighted

One camera began not detecting motion.  Upon reviewing the sensitivity settings discoverd the custom rules changed?  Tried to edit but getting rule 4000 and 4001,"this rule cannot be updated".   Rebooted base station still having same issue. What is the problem?

As far as I am aware its the latest ARLO app. Downloaded today from the apple App Store

BTW, I found another forum post saying it was the phone permission. I tried various permission changes, in addition to phone, without luck.

Ideally, a Netgear employee would explain what happens during the "getting status" interaction with the base, so we could avoid guessing as we debug.