Why does the camera battery level show 100% on the app but through the Chrome web portal, it shows 55%? I restarted my base station and the different battery levels still say 100% and 55% on the same camera.

There are other inconsistencies as well such as "camera offline" via the web but works fine through the app. I've tried clearing the browser cache and history which doesn't fix the problem.

I took their survey a while back ago to only get an error at the end.

I don't promote Arlo to anyone either. I use it because I'm stuck with a $1000 investment. The cameras are used for entertainment purposes such as wildlife at night, etc.

The web portal is almost a joke, it's not a cookie thing which Arlo seems to make it.

The cloud team has released updates to the web client that should have resolved this issue. If you're still experiencing this behavior, try the following steps:

After the second log in, you should no longer experience the issue.

After making sure browser and other data have cleared, no change in either Chrome or Safari. Still showing cameras on when they are off in the Arlo app and battery status is incorrect as well.

Same for me using chrome, edge and Firefox. Same in incognito private modes. App still says v3.6.12_1 so no update has pushed out to AU yet.

No change on battery level indicator for me either.  Also, the Schedule function does not work, immediately disarms all cameras no matter what mode is supposed to be running per the Schedule.

Nothing is fixed as far as I'm concerned.

I have 5 pro 2 cameras.  All with current firmware update.  4 of 5 are fine.  The fifth shows 16% battery level even when I use a battery from one of the other cameras that is 100% charged.  Anyone have any suggestions?

If you’re getting this using the arlo web portal in browser pc then compare with the arlo mobile app to see if is the same.

So the cloud team issued an update to the web portal that doesn't work... what happens next?

Back to the drawing board or start a new project?

Thanks for the quick follow up.  I have the cameras "viewable" on an IMAC computer and an android phone with the app.  The battery (which I have swapped out just in case) tests as "full" and on the android when the camera page opens starts at 16% but immediately flips to "full".  Nothing changes  on the Mac...16% all the way.  I have cancelled and reloaded the web site on the Mac with no change.  If it wasnt for the fact that the camera that has this problem (only one does!) sends "low battery" notices even though the battery is fine I wouldnt even bother with this.  Any other ideas?  I'm well beyond warranty so Arlo doesnt want to have anyting to do with me!

I don’t believe that your equipment is the issue, nor any workaround that still works. Just ignore the arlo web portal.

My setup behaves the same and has been for the last two months. More customers are reporting the same issues daily as they discover the web portal fails.

The arlo web support team has been working to resolve it but have not achieved a global success to date.

I imagine that the priority of the web issue fix will now be further pushed back by the recent firmware update causing operational issues.

Oh swell! But thanks for the insights...

Shock horror, this STILL isn't resolved over a YEAR later, I have four Pro 3 cameras, plus 3 extra batteries, doesn't matter how many times I change battery, reset, re-sync, re-enable, re-attach, re-do re-finagle or whatever, clear cache, clear cookies, log in, log out, shake them all about.....this ONE single camera just refuses to show any more than 53% battery via the web portal even though the app shows it at 98%.

Now, you could say why does it matter, clearly the app is correct, but what happens if one day, and lets be honest is there any day something isn't wrong with Arlo, the app ISN'T correct, and your battery is down to 3% but you think it's 53%, then what?

Your camera doesn't record your house being robbed blind or your wife being mugged in the driveway?

The fact you think this solves anything is as hilarious as it is brain numbing.

I suspect that the web portal fix will now be further delayed until the base station firmware bugs get resolved and rolled out.

There must be some big changes in the pipe line to delay such a simple patch for one web app.

w about this then,

Just after typing my last message I thought what the h*ll, I'll reset the base station.

Now the problematic camera say it's at 100% and plugged into the mains (little lightning symbol on battery icon) even though it ISN'T plugged in, and the only camera that actually IS plugged in now says it isn't.

Utter BS is what I say.

It is not our equipment. It's clearly on their end. All those standard phrase "Fixes" are nothing but a distraction for that their whole thing is outta control and they don't wanna admit it.

After seeing 2 of my 5 Arlo 2 camera batteries "not charging" and remaining at 3% and 51% respectively, and after buying 2 new batteries assuming this was the issue but not resolving it, I find this thread and realize there's probably no issue with the batteries and the web app/firmware update is at fault. The phone app shows them at 100% charge, and they're working fine. Throwing good money after bad.

It's going on since months. There seems to be no interest to fix it either.

I think the real waste of money was spent on Arlo equipment. The issues have been around for a long time and it seems more issues keep popping up. I can see how it can take a while to add a new feature, but to not be able to fix something that was already working isn't right!!!

Par for the course it seems.

They upload some code to fix one issue but with beta testing or sand bxing anything they just run with the quick fix and if it breaks some other element then they'll just leave it broken until they come up with THAT fix and it's rinse and repeat.

I would seriously posit that the arlo team of software engineers consists of maybe a dozen people at most and they most likely have a high turnover of staff and this is why the same mistakes keep happening because of a lack of continuity on the implementation side of the system.

A lot of the issues come across as basic software errors, I mean if camera systems a fraction of the price can operate seamlessly then you'd think a multi-million dollar longstanding software/hardware corp would have this buttoned down tight since they practically invented the notion of remote IP based cctv.

Another day, another error.

I have a camera, on an official Arlo solar panel as you can see in one of the images with the sun symbol, it has NO activity zone set, yet now gives me a constant warning that "activity zones are currently disabled" because "AC" power has been disconnected, even though ac power was NEVER connected ever, and this camera has NEVER had an activity zone set up anyway.

So another day, another stealth update at some point and another device fault with no solution available because even resetting or turning the camera off won't make this warning go away, so obviously whatever update was rolled out during one night has caused issues with the solar panel being connected, because my other cameras that are NOT connected to ac don't have this issue, but neither do they have solar panels either.

Arlo strikes again, now they're even causing their accessories to fail.

The comedy writes itself with these idiots. 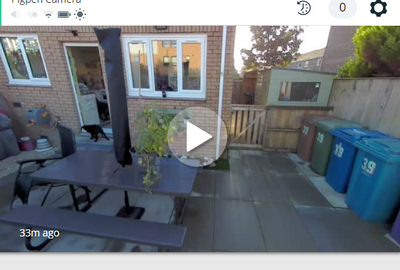 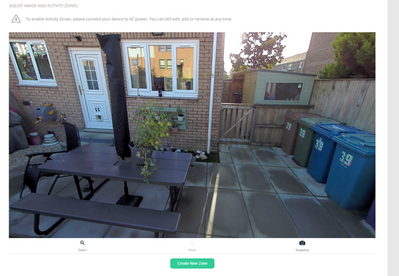 
I have a camera, on an official Arlo solar panel as you can see in one of the images with the sun symbol, it has NO activity zone set, yet now gives me a constant warning that "activity zones are currently disabled" because "AC" power has been disconnected, even though ac power was NEVER connected ever

Did the trial subscription just end for the camera? Normally that is when this warning first shows up.

Note that the solar charger doesn't count for this - they trickle-charge the battery, they don't provide enough power for this particular feature (or for the foresight feature if your camera does that).


this camera has NEVER had an activity zone set up anyway.

While this could just be a bug (as you suggest), it might be worth double-checking the video settings.  Sometimes people set up a zone to fill the entire field of view (as deleting a zone isn't as intuitive as it might be).

You could also try swapping two cameras, and see if the problem shifts to the one connected to the charger.

There was no zone set up and never was set up, I don't see how going in, and trying to delete something that is or was never there anyway helps, and even if there was an "activity zone" I couldn't delete it until "AC" power has been restored which is impossible hence why I'm using a solar panel instead.

This wasn't an issue until obviously an update was done, because nothing was touched or changed.

I have an issue, for something I never had or have, with a supposed solution being something I can't do, because I'm using an accessory that now seems to be part of the issue because I can't use the feature (AC power) that seems to be causing the problem.

The idiocy writes itself with arlo software engineers.

It's just another failure of an arlo device via a BS arlo update that as per usual is not beta tested before being rolled out to screw everyone over.

Please note for future irrelevant replies, the whole point of having these cameras is so I don't have to spend my entire life at home having to deal with their issues, it's not a solution to say swap them, or remove the battery, or press the sync button or whatever, I need them to do what they were bought to do, I didn't buy them as a means of exercise, to be constantly climbing up a ladder to solve issues.

Oh, and I had to log in again (and need to every time) even though I check the "keep me logged in" box, these clowns can't even keep their forum site working properly but we trust them with home security.

Luckily I get a bonus in December, more than enough to buy reliable cameras and then I can sell this arlo junk to someone with the patience to be constantly screwed over.