We are having the exact same issue.  The Arlo iOS app rarely has connectivity issues; however, the Arlo Anroid app rarely connects.  Both the iOS device and the Android device are connected to the same Wi-Fi network.  Did you have any luck with Arlo support?

I would suggest contacting customer support regarding this issue? I have attached the link here for you - Arlo Tech Support

Tutor
I’m having the same problem, I created a similar thread. Seems like no one has a good answer, it’s just a poorly constructed device when it comes to WiFi. Drives me crazy because it’s the one device we need to be reliable and it’s the worst product Arlo makes. 🤦‍♂️
1 Like
Message 28 of 212
6,928

Aspirant
We have exactly same issue, apple app connects fine, android driving us insane, tech help is useless, must be a widespread issue, they should be proactive, no doubt a software update has done this , pissed off

Do you mind providing a little more detail regarding the issue you are experiencing?

Aspirant
Our iphone logs in on the wifi but our Samsung's android app doesnt, sometimes it will, it says connecting but no video will connect. Its connected to the arlo as we can see the battery and temp etc, turn the light on and off but no video feed.
0 Likes
Message 31 of 212
7,231

Have you tried removing & re-installing the Arlo App? you can also try & remove the camera from Settings > My Devices > Re-add it

Aspirant
Thanks Shane, why would we need to? We have. It was a pain. Something has changed and it wasn't our end. Why does the iphone app work?
0 Likes
Message 33 of 212
7,229

What version of the Arlo App are you using? Do you have another Android device you can test this issue with?

What Device/Model/OS are you using?

If you have not already, you can download the new migrated Arlo App on the Google Play Store. You can find more info here: Arlo is migrating to a new Arlo app this month

Aspirant
Reloaded the new app and it worked. From your link, I reinstalled it 4 days ago and no change so guessing this app has been updated , thanks Shane
0 Likes
Message 35 of 212
7,225

Let me know if you have any further questions & I will be here to assist you.

Aspirant
Hi Shane, went. Ack to it's old tricks, which was worse as we had it running as were relying on it and not hearing anything you think it's still working. Not good.
0 Likes
Message 37 of 212
7,210

Have you tried contacting customer support regarding this issue? I have attached the link here for you - Arlo Tech Support

Been away for a while but just wanted to follow up. Unfortunately, I haven't had the time to sit on chat or a call with support. Would be nice if there was an email option so we could go back and forth that way. -EDIT: Nevermind, I see there is an email option. But it disappears from the page once the Live Chat part loads if Live Chat is available at the time.

Things I've tried with the Android app:
- Stopping the app, clearing the local data and cache for the app, uninstalling it and then reinstalling. Doesn't seem to help, at least not as a long term solution.

- Powering off the Arlo Baby, my phone and my wifi router, even though the iOS is connecting locally just fine before doing so, and then powering everything back on. Router 1st, wait for it to finish booting, Camera 2nd and wait for it to connect all the way(confirmed by using the iOS app to connect to it), Android phone 3rd.

Sometimes the Android app won't stream the video at all, just shows connecting, even though it's showing everything else like battery level, air quality info, etc.. When this happens, I can go into the Device Settings in the Android app and toggle the device off and back on. 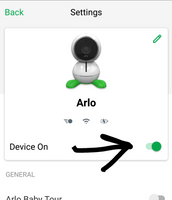 Someone posted this link in this thread but looks like its been deleted so am reposting!!! Someone is taking Arlo to court over this shambles of a product.

There's clearly an issue and Arlo doesn't care to support their product.  It started in June and since it's been contstant basic bull**bleep** from support blaming my wifi, bandwidth, or the best is 'the reset didn't take' even though it's been reset 20 times.  If you can return it and buy something else.

Aspirant
Of course I tried support, no reply, nothing, why do support if you dont do testing on your app before releasing it. Sack the Andriod app manager. I think I might channel my energy into warning others about this product. 10 reviews per week, 1 hour, 520 reviews per year, 52 hours, this is less than current effort and returns the same output to me. Maybe different to arlo sales though.
0 Likes
Message 42 of 212
7,162

@ShayneS opened a support ticket for me, thank you very much! Support's response was to install the Arlo Technologies branded app from the Play Store and no other information. I responded back saying I already had it installed and the issue that I'm seeing is still the same. I also suggested they reference this post to see if it would help at all. Unfortunately, the next email I received a day later was a "How did we do" type email, which normally happens when a ticket is closed. It seems they either didn't see the response or the webform I was directed to didn't actually update the ticket. I have no way of knowing because there is no actual ticketing system we can log in to.

The new app doesn't appear or function any differently than the Netgear branded one. Maybe a copy/paste with a name change? I still do not get a local/LAN connection to Arlo Baby on my Andriod devices. Yet, the iOS app still connects via LAN every time, both are on the latest "Arlo Technologies" branded versions now.

Just the be clear, the reason for the LAN vs non-LAN concern is because of the delay and the fact that this is being used as a baby monitor. The delay between LAN and non-LAN is huge when it comes to having a baby that you're using something called "Arlo Baby" to monitor while they're sleeping. I have other options, an iOS device, which for whatever reason works fine. Not every one that may have this product have two platforms to work with. To me, it's a safety concern.

Aspirant
Lol, mine still just says connecting, so you have to turn the device off and on and then it connects for a while then randomly turns off so you dont know you arent monitoring your baby. This product is dangerous. Should not be used for baby monitoring, terrible. Terrible stupid support also. Your app is broken for android and needs bugs fixed, these are bugs you have fixed before.
0 Likes
Message 45 of 212
7,080

Initiate
The new app has a few glitches which I really hope can be sorted soon.
1. The sound cuts out. Before when you put it on to always listening it stayed on indefinitely until you turned it off. Now it cuts out randomly which is worrying as it’s supposed to able me to listen to my baby.
2. The feed doesn’t continue to play. You have to press play everytime I look at the app which never happened before and often the video is frozen when you go back to it so I have to refresh the app to get it working again. Again not great if you’re trying to monitor a sleeping baby.
I’m sure you’re aware of these glitches because they’re quite obvious to me as someone who was quite familiar with the old app.
These need fixing fast. We were really happy with this baby monitor until now would hate to be disappointed further
1 Like
Message 46 of 212
7,101

Initiate
Ive had the same issues, it just won’t consistently stay connected to my network. All my other arlo cams stay connected just fine, just not the arlo baby
1 Like
Message 47 of 212
7,088

Aspirant
So recently my two arlo baby camera aren’t connecting often. It always happens at night time, I think something wrong with Alro servers. My 5 new Arlo 4k always connect, day or night. Nothing has changed except their new app. We had issues before the new app as well. I also have a Linksys velop mesh WiFi system and FIOS. I force close app and reset WiFi but nothing fixes it. I haven’t rebooted it since that causes noise(dumb idea arlo to have noise during rebooting) and wakes up my boys. Thoughts?
0 Likes
Message 48 of 212
7,077

I am also having similar issues and so disappointed with this product. It is so unsafe and should be discontinued. The new app has not helped at all. Often the temp data is missing and I can’t log in to watch my precious baby. I want a refund!!!

Can you provide a bit more detail regarding the issues you are experiencing?

Also, which Device/Phone/Model/OS are you experiencing the issue with?