No better for me. In the last 7.5 hours I've had 110 meaningless recordings similar to what I outlined in a previous post in this thread.

Much better here. So far works as expected.

Between 12:52pm and 2:09pm EST today TONS of FALSE recordings and alerts.

Did something break with the cloud changes?

Can we get a Permanent Fix please?

the false recordings took place outside of your set activity zones this afternoon?

My smart notifications and activity zones have (thankfully) been working really well since JamesC notified us they made a back end fix.

I just wanted to let everyone know since JamesC let us know a few days ago a back-end fix was applied to help alleviate motion detection notifications and recordings taking place outside of our defined activity zones that it has been working better then every in my almost one year of ownership.  Thanks James!

Also, I wanted to share some of my own experience with motion notifications and recordings.  IT IS SO important to ensure you use the 'camera position' feature under 'device utilities' for each camera setting.  I make sure that the black shaded bar is over an area within the camera view that I would like to receive no motion notifications or recordings from.  IE the street.  That makes the most difference in the cameras false notifications and performance.  It does take some time to adjust it perfectly but the camera's magnetic mounts definitely aid getting the camera pointed just right because they allow for any angle at all.

Aspirant
My smart notifications are working but a ton of recordings of cars driving past that are outside of my activity zone.
Model: VMB5000 | Arlo Ultra SmartHub
0 Likes
Message 106 of 212
849

Virtuoso
Hi Hammer! There are a couple of options.

1- simply delete your activity zones and recreate them.

2- if you never want to record vehicles driving by,, then use the camera positioning setting and make sure that the black shaded area of the camera view is over the road.

1- simply delete your activity zones and recreate them. -- Tried that many times (on web console and on the mobile app) after JamesC announced the cloud patch fix  and it didn't make a difference.

2- if you never want to record vehicles driving by,, then use the camera positioning setting and make sure that the black shaded area of the camera view is over the road. -- I shouldn't have to do this as Activity Zones should only record motion within the defined zone, not whats outside of it. Plus there is no way for me to position one of my cameras to avoid as you describe.

Virtuoso
Hi Hammer, regarding #2 you may have to move the camera if you can’t position it in a way that the shaded area covers the area you don’t want to receive motion detection notifications and recordings from.

This KB article explains it in further detail as well.

@n1976jmk  Yes you are correct here is the current rundown as of today.

So that is 187 recordings yesterday, and 12 recordings today.  Which leaves my battery for the camera at 56%.

So my hope is ARLO will get a permanent fix setup soon.  I know for certain it worked for about a day before it started acting up again.

As you will see from my previous posts I attach examples of the recordings.  Here is yet another which I believe is caused by the Flag which is outside of my designated Activity Zone blowing in the wind.

Virtuoso
Hi Tech-D, do you have your camera set up with the shaded area in the camera positioning setting over that area you don’t want to receive motion detection notifications and recordings occurring from.

Setting up my cameras that way has made a tremendous difference for me!
0 Likes
Message 111 of 212
825

@n1976jmk  If you don't mind me asking are you just a user or are you part of the Arlo team?

Virtuoso
Just a user but I’ve used the Arlo system for one year and counting and through many issues and learning so so many things that I like to share my findings with people on the community so they don’t have to suffer and get things resolved as quickly and easy as possible.

@n1976jmk  OK thanks for your input, I know you mean well to help others but I'm really looking for solutions from the Arlo support team.

My camera has been setup at this location since I purchased it back in December, there are times when everything works as it should.  Then like recently I believe there is either a software update or a change in the background that cause the cameras to go "crazy".  I can verify the when the camera is NOT working the issue is my flag, the wind blowing causing the camera to think there is motion.

I do not have AC power out in the area where the camera was placed.  This was one of the main reasons I went with the arlo system.  I have a solar panel that I purchased with the unit that works fine as long as you don't have over 200 recordings in a 24hr time span.  My biggest problem with this is my battery runs low or even dies and then I don't have recordings.  I'm tried of having to go out of my way to get this system to work and tweek it.

This should be a SET IT and forget it system.  Once I get the initial setup of the camera setup and recording properly there should be no further input needed by me.  That is NOT the case with the ARLO system.  I feel like every 30 days something blows up with the system.  I'm getting tired of it.

@n1976jmk  Once again, this is no way an attack on you, it is months of frustration that started on day 1 of owning the camera.  I overlooked the issues in the beginning giving ARLO the benefit of the doubt but at this point it's becoming a headache.  Thanks for reaching out to assist, but my posts here are to get the attention of ARLO support.

Virtuoso
Hi Tech-D, I’m a 14 month owner and very similar to you having to troubleshoot through many firmware and software updates that when contacting Arlo support via chat or online support has been very unsuccessful.

So I rely on two things, this community and what I’ve learned along this road with my own system.

From my experience, I would re-position or move (worse case) using the camera positing setting under device utilities.

Make sure the flag is within the shaded black area seen in the camera positioning setting.

Setting up the camera that way better guaranteed that when activity zones are behaving as expected you won’t have 200+ recordings because with the flag in the black shaded area it won’t record motion from it regardless of the activity zone defined.
0 Likes
Message 115 of 212
804

Aspirant
No matter what I do, I keep getting notifications and the cameras keep recording. I have 4 arlo ultras and an arlo pro 2. I set 2 of the ultras with activity zones and it doesn’t change anything. They always record even if the activity zones are set correctly. I also just bought 2 video doorbells, which I’ll be installing today. I keep reading everywhere that the activity zones have been fixed, but it’s not the case for me. Everything is up to date. I just end up turning off the camera because it’s so annoying. I also set the sensitivity much much lower and it doesn’t change anything. Please solve this 😑
Model: VMC5040 | Arlo Ultra Wire-Free Camera
0 Likes
Message 117 of 212
778 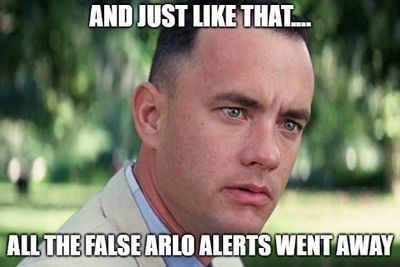 And that is with me not changing 1 thing....  So now you know my frustration.  🙂

n1976jmk, so does this mean you are no longer seeing the "AC power has been disconnected" error on your wireless cameras? I just wasn't sure if you were in that realm of issues prior as I have been.

Virtuoso
Hi Steve, I never saw that message on my system but I do have my two cameras connected to AC power.
0 Likes
Message 120 of 212
751

There's a whole other batch of users with the activity zone issues but in this case it's due to the AC power error showing on wireless cameras that should never have that issue since they use batteries. So in our cases the fix you just reported isn't working. I've reset my zones, kept all activity below the black bar you refer to (which I didn't realize only shows on the phone app), and still receive the AC power error. Thanks for all your involvement in troubleshooting these issues.

Virtuoso
Anytime Steve, that’s what this community is for! I’ve learned so much over the last 14 months from here that I like to give back when I can.

Can I ask, does your cameras have a subscription?

Btw, I would sometimes see that same message even though I’m connected to AC power when I had no activity zones setup on my cameras.
0 Likes
Message 122 of 212
924

Yes, it has a subscription and I've verified it all shows good as well.  Had my own thread on this started but support had merged it in with another thread that had similar issues:

AC power has been disconnected from your Arlo device

Thought I'd just add to the discussion what I've found. I'm new to Arlo, literally 5 days in, and so far I'm generally happy with them with the sole exception of the Activity Zones. From everything I'd read I was expecting to be able to set activity zones despite the cameras being on battery only, however this appears NOT to be the case from my basic testing.

When I set activity zones for my cameras, the one that ISN'T "wired in to AC power" has the warning saying: "To enable Activity Zones, please connect your device to AC power. You can still edit, add or remove at any time." This isn't an issue for me with this camera as I don't have a need for activity zones with it right now, but it was going to be an issue for any future cameras I was contemplating to add to my system.

The camera I have wired into AC power (primarily so I get the 3 seconds of pre-motion video which I did know about) has no issues for me with the activity zone based activations. All works as described. However, if I turn the AC power off (or disconnect the cable) then the camera will get activated outside of the assigned activity zones!

In summary, my testing appears to confirm that if you want activity zones to be functional you MUST have the camera wired in to AC power. I kind of get the need for AC power for the 3 seconds of pre-motion video as effectively the camera is "always-on" but, in my opinion, activity zones should function on battery too... it is ultimately a battery power saving feature!

Welcome to the community Naiyas! On the wireless cameras, mine had been working fine for about a month, no AC warnings. About a month ago there was a firmware update to the hub that caused the AC issue to start showing on the cameras. They've got so many people having this issue now I would assume they are working on some update to try and fix it.