Is anyone using the Arlo Pro 4 (or even Pro 3) with an Arlo Total Security Mount (VMA5100-10000S)?  My Arlo Pro 4 is mounted fairly low, and with the magnetic mount it could easily be removed.  I bought a Total Security Mount thinking this would provide some added protection, but for me it just doesn't fit well.  I tested it before mounting it on a wall.  I can insert the camera in it easily enough, but I can't release it (using a small hex key that comes with it).  It barely releases from the housing and not nearly enough to grab the camera and remove it.  I can only get it out by shaking it, violently.  This almost, sort of works if I'm sitting in my living room, but if this was mounted to a wall, the only way I'd be able to remove it from the housing is to take the entire housing down, and even then I'd still have to shake it very aggressively.  That's simply not a workable solution.  I've had an open case with Arlo support since early December, and I've been assured it's been escalated to engineering, but I get zero response from Arlo about it. I've even sent a video of me trying to remove it from the mount housing and asking if that's normal, but no reply from Arlo.  Meanwhile the mount sits in a box in my house because it's effectively useless outside.   Arlo did previously send me a replacement mount, but it behaves the same way.

So I was just wondering if there are others out there that have tried this combination and if it's been a successful approach for you.

I have followed the instructions step by step.  They are the same as those included in the box.  The problem is step 4...

"finger-tighten the mount lock (clockwise) to lock the camera in position."

I originally posted about the useless security of the security mount a year ago. In another discussion group I mentioned that I was going to dispose of my Arlo cameras but have decided on another course of action.  In the interim nothing has been done.  There have been posts from what appear to be Arlo employees posing as users in a possible  attempt to divert attention away from the useless design of the security mount.  This is common practice with company sponsored forums so I am not surprised.

Because of the lack of interest by Arlo in these problems I decided to consult with an attorney who specializes in product issues.  She reviewed a number of the Arlo discussion groups and any response by the company either in discussion or product revisions and found no evidence that Arlo has any interest in improving their products.  Possible legal issues Arlo may have include violation of the Lanham Act, breach of contract and warranty rights, and violation of various Consumer Protection Acts.

Aspirant
Yes, I think I saw your post but I couldn’t reply to it as it had been closed. I have contacted customer support and asked them to explain why the product does not perform as advertised, they didn’t seem to understand the problem and offered to send me a replacement. I explained that the product was working as designed but does not work as advertised and asked them to get an explanation from product management and suggested they needed to do a product recall and replace it with a product that works. The strange thing is the locking collar actually looks to have been designed to allow the collar to be locked within a range but it appears they didn’t finish it. All they needed to do was include another locking screw in the collar that could be tightened once the camera is in the correct position.

I purchased 4 cameras and paid the extra for the 4 security mounts so that I didn’t have to worry about the cameras getting stolen. Now I have over $1,200 worth of cameras and mounts that anyone can just remove with their fingers!!!

I am in Australia and I’m sure this would be consider false and misleading advertising here under the trade practices act so definitely illegal.
View products (1)
0 Likes
Reply
Message 28 of 41
808

If you feel that you've received a defective accessory I encourage you to reach out to the Arlo Support team within your Arlo mobile app under Settings > Support and request a ticket to investigate a replacement.

Is your post a joke?  Myself and many other Arlo owners have clearly and repeatedly described the defects of your products over the past year.  It’s insulting that your response is to “request” a support ticket rather than do something to correct your defective product.  Would you be willing to provide a complete list of all individuals who have purchased your total security mount.

I have raised a support ticket last week but have not heard back and based on the comments from others in this forum I am concerned I will not hear back. As stated previously the problem is with the design of the product, you can’t fix this by sending me a new Mount. The Mount is sold as a secure Mount to protect against theft of expensive cameras but the design is not secure. This requires a redesign of the product and a product recall of what has been sold.
View products (1)
0 Likes
Reply
Message 31 of 41
766

Aspirant
I completely agree with what you say. We modified our with the addition of a tiny screw to prevent manual unscrewing. Is now functional. Badly finished faulty product.
0 Likes
Reply
Message 32 of 41
728

I was going to return security mount as I thought a part was missing. It does appear that a screw or pin (or possibly a sprung loaded catch) should be fitted to base ring.  This would then catch on the plastic piece present on the lock ring to stop it unscrewing.  This plastic piece appears insufficient to stop a firm twist from snapping it off.

I can't believe that this was released like this.  All the security screws and keys seem irrelevant given the lock ring can just be unscrewed.

Does fitting a small bolt to act a locking pin work OK? Or is this just a dud?

There have been numerous comments about the Arlo Security mount.  Arlo has done nothing to correct this defective product so don’t expect anything.  I would return the camera and mount and purchase something that works.

Yes this worked for us, such a simple fix. I imagine it could be unscrewed with force, but is sufficient to deter.

I decided to keep the mount.  For the record, I aimed the camera and tightned the lock ring.  Then removed the camera from the mount and insertd a pin, I used a piece cut from a metal coat hanger.  The pin needs to be flush with the top of the hole when pushed in.  When mounted to the wall plate the pin will not be able to move.  Looks like this was the intent of the design and it seems "secure" enough.

The mount still suffers from the poor design choice of using a standard hex screw instead of some propriety screw type.  However, I believe it is now good enough to stop kids just nicking the camera for a laugh.

If some one from Arlo reads this - adding slots to the base plate mounting holes would be a good idea. 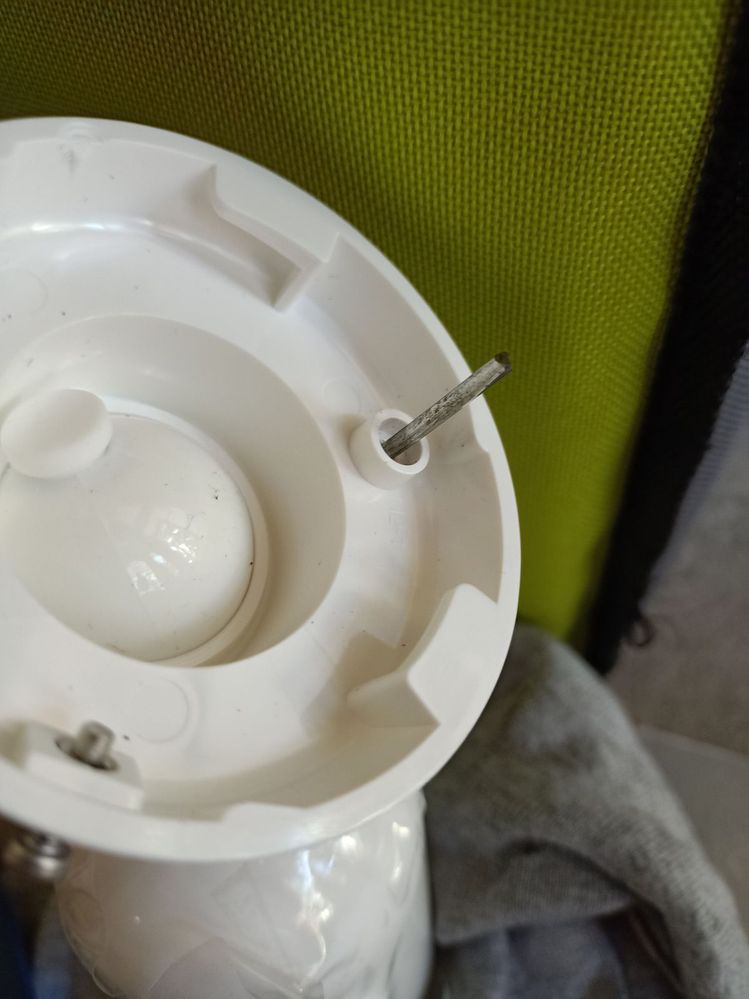 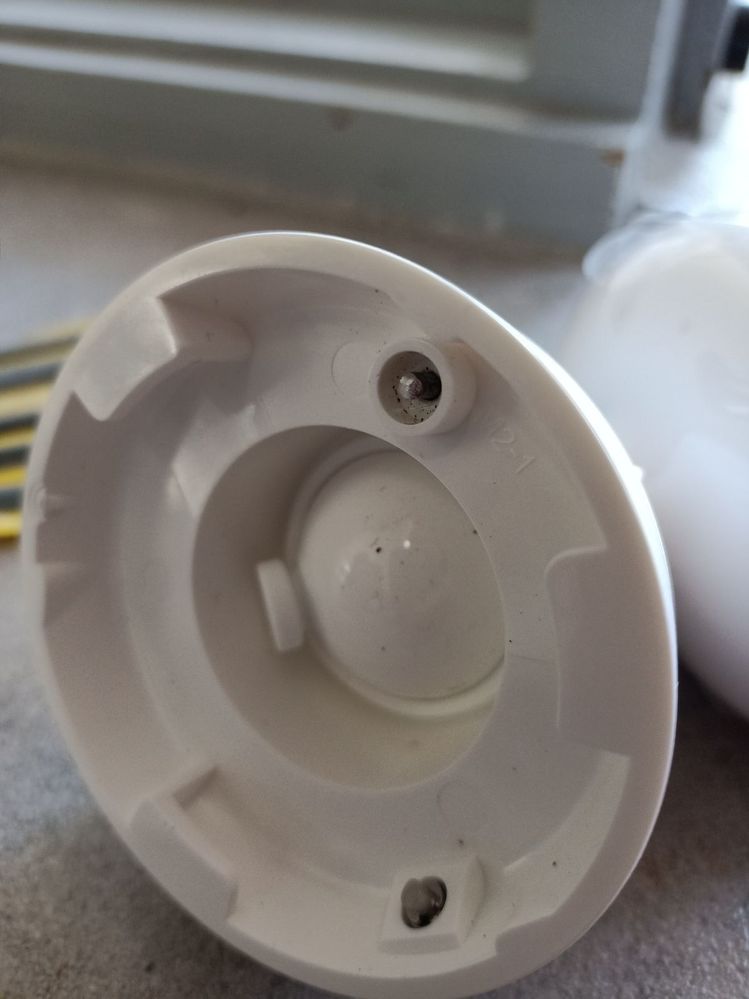 We used a tiny screw, similar to something that might hold a small battery cover in place.

As I said in my last comment Arlo has done nothing to correct the useless security mount.  They continue to sell this defective product and ignore their customers.  To be frank comments about user fixes to Arlo’s problem are irrelevant.

Do you happen to know a part number for the hex wrench you bought? I've got 3 Ultra 2 cameras that came with this mounting system & I'm afraid I'll misplace or lose this "tool" rendering them useless when their batteries discharge.

Thanks... I'll head out tomorrow to get one😁