Re: Rechargeable batteries for use with Arlo cameras

Apprentice
Battery life depends on factors specific to your situation... Meaning, how fast is your internet? How often does it disconnect and reconnect? Do you ha e a quality router? Do your cameras have at least 75% signal strength? Are recordings during the day, night, cold or hot days. All of this comes into play. I get about 20 to 30 days from my eagletec and I am happy. I keep a spare set so I always have a set charged and ready when it is time to change batteries.
1 Like
Reply
Message 576 of 846
2,388

Pet1700 wrote:
Battery life depends on factors specific to your situation... Meaning, how fast is your internet? How often does it disconnect and reconnect? Do you ha e a quality router? Do your cameras have at least 75% signal strength? Are recordings during the day, night, cold or hot days. All of this comes into play. I get about 20 to 30 days from my eagletec and I am happy. I keep a spare set so I always have a set charged and ready when it is time to change batteries.

Yes I understand all those variables can affect battery life/performance. However I have other sets of EAGTAC in other cameras in same location/temp. conditions and they all average 60+ days.

For all the rest......yes is the answer, believe me it's either the camera or the batteries. Other cameras connect to same router etc. Only difference is the batteries.

FYI - My current status update of Nitecore, Eastshine and Eagletac batteries in cameras ranging from ~5.4 minutes to ~0.0 minutes of recording per day.  All cameras are on highest recording quality setting.

Apprentice
mA is the rate of charge that your D4 charger is charging your battery and doesn't say anything about capacity. mAH is the capacity and higher mAH generally means longer life.


20mA simply means 20 milliamperes is required or drawn. mAH is a measurement of capacity - usually denoting batteries. Depending on the current being drawn, the time for the capacity to run out will vary. For example, 200mAH on a battery means if you draw 200mA you can run it for one H (hour).
0 Likes
Reply
Message 579 of 846
2,376

I just change them out now at 35 for a safety factor since the cells are almost depleted at 3v and I try not to run them all the way dead...about 2.8v

Funny tho , we've talk about it before, in real low level use the OEM cells out run the rechargeable by a lot.

I still get 7 months on real low use cams.

Tank you for the explanation!

Has anyone tried one of these ?

What does it do for Arlo rechargeable batteries ?

I beleive you could use it to test the actual capacity (mAH) of batteries .

I suppose if you made up a test rig to use a buld or something to discharge the battery while connected to the device it could measure the mAh as the battery discharges.

This monitor can show the voltage, current, and total power output in real time from any USB socket or DC power cable upto 50V.

The monitor is useful for a wide range of uses: it can help you angle a solar panel to capture the most energy, see how much capacity a battery pack really has, how much energy it takes to fully charge your devices, test your household or car batteries to see if they are close to dying, and test your USB cables to see if they are causing slow charging.

For what it's worth to those checking in on this thread from time to time, I broke out the battery life decay rate for my 13 Arlo cameras grouped into 4 broad categories.  (Note: 1 camera uses Nitecores; 5 use Eastshines;  7 use EagleTacs.)

Two of the categories are ultra low use (which include Eastshines and Eagletacs).  The time periods are different (27 vs. 55 days), but you can see the gist from the graphs below.

The other two categories are closer to generally spec use (with a couple ulta low use mixed in).  One of those horseraces (August 13-September 9 or 27 days) has 2X4 Eagletacs, 1X4 Nitecore and 1X4 Eastshine in the comparison (all between 4.2 and 5.5 minutes per day).  It's interesting to note that the lowest average minutes per day Eagletacs (4.2 minutes) came in a distant last place even compared to the other EagleTac camera with higher use (5.0 min/day). However, a 5.0 minutes per day Eagletac grouping is beating a 4.5 min/day Nitecore grouping.  The Eastshines camera happened to have the highest minutes per day recording (5.5/day) and are coming in 3rd.  Would the Eastshines be ahead of the 4.5/min Nitecore or 5.0 min/day EagleTac if if the they recorded 30 to 60 seconds less per day?  I don't know.  Seems like a crap shoot to me.

I will say that the Eastshine outperformance (vs. EagleTac and Nitecore) in ultra low use cameras I observed early on appears to be persisting.  I have about 6 cameras that barely record anything because they're largely set to either record only late at night or in areas where motion should not occur (and if it does I need to know about it ASAP!).  4 of those Cameras use Eastshines and 2 of those use EagleTacs...  If we compare those on a drain rate per day, they come out the following:

1) I think I've seen enough to conclude definitively that Eastshines beat Eagletacs consistently in low use cameras because they appear to have a lower self discharge rate (as they sit idle).  I believe Eastshines best Nitecores as well in these low use examples (from prior observations with less robust data), but the data below does not cover that.

The only possible caveat is that Eastshines will drop out really fast compared to Nitecore and EagleTacs once they get below the 20-30% charged range, but I don't find that likely given they have a higher mAh than both of those, and that they've generally shown a lower battery decay rate when sitting idle.  However, I guess it's theoretically possible.  I'll try to go another week or so before swapping out and recharing batteries, but I generally swap them all out in a specific area rather than waiting for each individual camera to die. 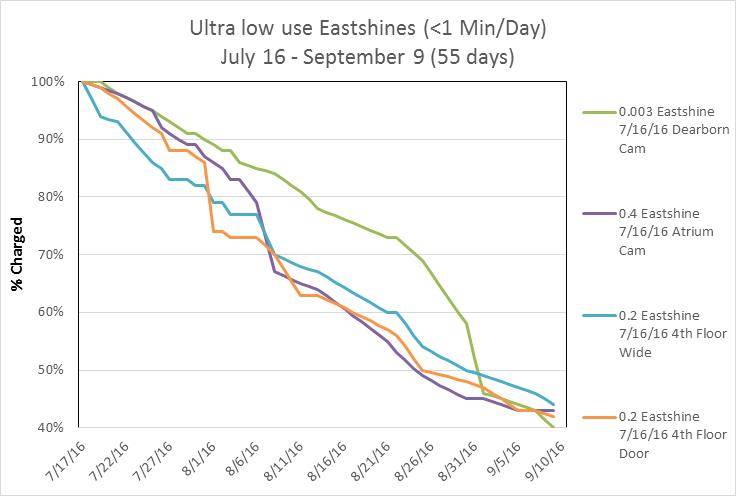 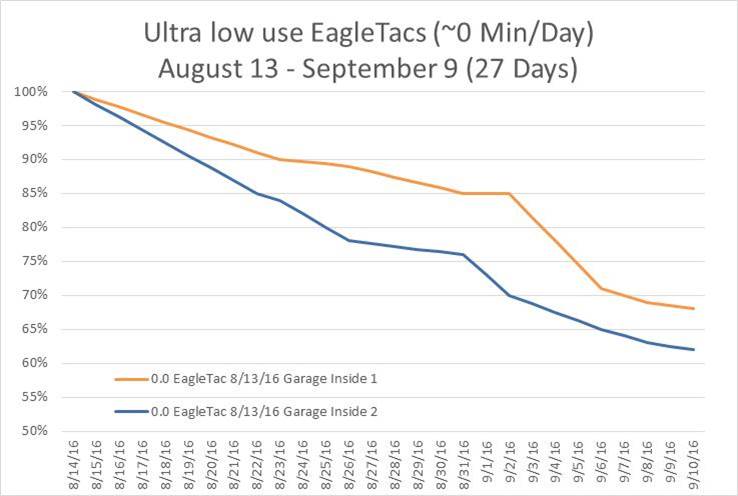 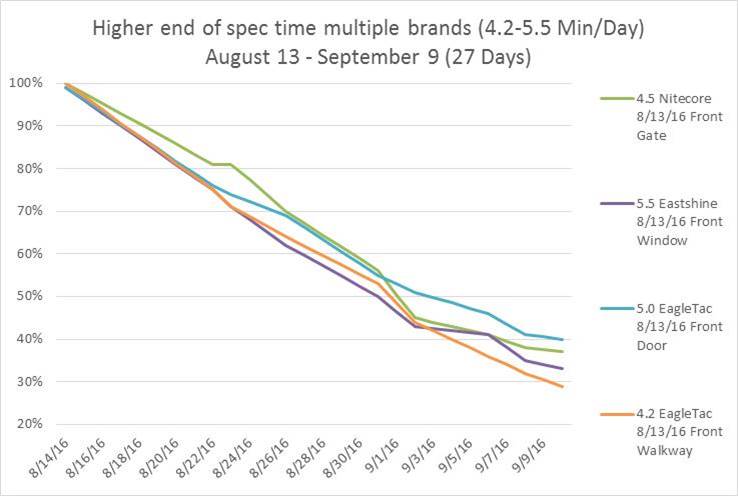 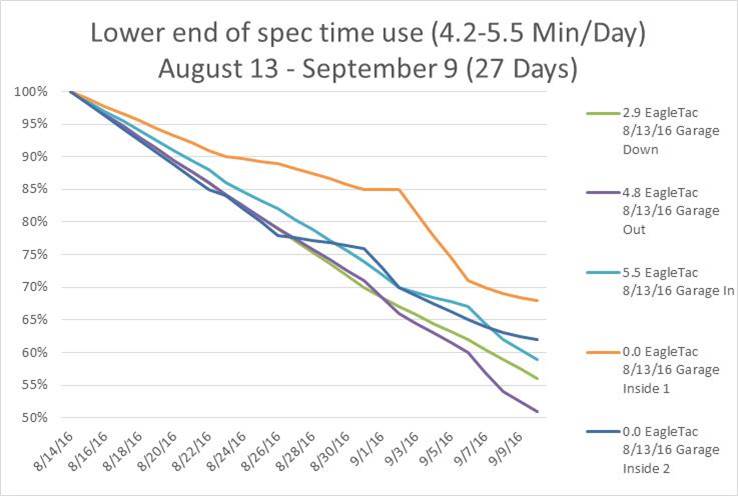 but it still seems to come out that the heavy use cams with rechargeable cells run longer than the OEM primary cells while in very limited use the OEM cells run up to 7 months.(out last rechargeables).

Self discharge seems to make a diff and shouldn't be discounted.

Have a problem with one camera, wearing out my rechargeable batteries. Have tried swapping batteries around with other cameras with similar location, amount of use etc. which proved it was the camera causing such quick discharge.

I brought this up earlier, thinking it was due to some bad batteries, however after going through all the testing it's become obvious it's the camera burning way too much battery juice (approx. 10-15% per day with an average use age of around 2 min./day).

Anyone else experiencing anything like this? I may have to initiate a support call but thought about asking around here first.

Did that as well....... still excessive battery wear from same camera. Really weird.

Open a case for a possible RMA.

Did that as well....... still excessive battery wear from same camera. Really weird.

I also recommend contacting Netgear.  I had one camera in a 4 camera setup, whose night vision would not work.  After resetting the camera and trying different locations, as requested by Netgear support, they replaced the camera. Though I could not get them to tell me if they sent me a refurbished or a new camera.  Regardless, the camera is still working.  The moral of the story is,  cameras do fail or do not work properly.

As far as I can see Eastshine 16340 batteries are not available in the UK, EagleTech also seems hard to find, however Nitecore does seem generally available including on Amazon.

Does anyone have any further recommendations for makes that are available in the UK?

By the way, I see some models listed on eBay with absurd capacities of 1500mAh or even 2000 or more!

With regards to the charger the Nitecore D4 is also available in the UK with a UK plug. I did see a notice about fakes of this charger. See - http://www.electricalsafetyfirst.org.uk/product-recalls/2015/04/counterfeit-nitecore-d4-digi-charger...

I would suggest Netgear should have considered making the Arlo slightly bigger to be able to hold bigger more powerful batteries, or provided the option for wired power as well.

I'm just Swapped Cameras 1-4 today as Camera 4 fell below 15%.  I wanted to memorialize this for anyone interested before refreshing the batteries in those 4 cameras.

i bought these rechargeables from amazon, because they have built in protection circuitry.

BUT, they were REALLY TIGHT to fit into the camera.  Worse, i snaked small wires in there to attach a solar cell.  I got it working, but it was pretty dicey because of that tight fit.  I don't recommend them because of the fit.  But i do like that they have protection circuitry so i won't overcharge them with the solar cell.

According to your link these are 34.8mm long, which from memory are the same length as the Nitecore. I don't find my Nitecores particularly tight - they are a little tight, but it doesn't feel like the cover is about to break when I close it.

Oh, not the height, i should have said it is the diameter that is too much.  They are squeezed in so tight now that i don't know if i can get them out.  Hopefully this hack keeps working so i don't have to take it apart...