Re: Live view not working on IPad Pro

My 4-cameras work fine on Windows Computer but not on iPad .  It seems to record and save but you don’t see LIVE   Pictures.  I can log onto my old iPad and it works fine.  I have reinstalled the app on the iPad as well as the iPhone.  It won’t give you live shots on either the iPhone 7 or the iPad. I also have reinstalled the base station and synced all the cameras. Again it will run on older app on my older iPad

This is outrageous! I spent nearly a thousand on this system.

Latest versions of IOS and the app...now can only “hear” live...picture is static.  This sucks!  I have three systems (three different locations) and 15 cams...iPad Pro

Live streaming is gone...com on guys this is why I bought three systems!!

I'm trying to keep an eye on my baby with Arlo Baby using my iPad. I get live audio but the video feed is not live (as it shows the room without my baby in it). When I try the same thing with my phone I get the correct video feed. See screenshots. The first image is hte correct one from my iPhone, the second is from the iPad. Both are recent devices on latest iOS version. My wifi is an enterprise-grade solution - Ubiquiti Unifi with multiple PoE access points throughout the house and I'm on a 150mbps symmetrical fiber line with pretty low latency. I tried force-closing the iPad app as well as reinstalling and I get the same issue. 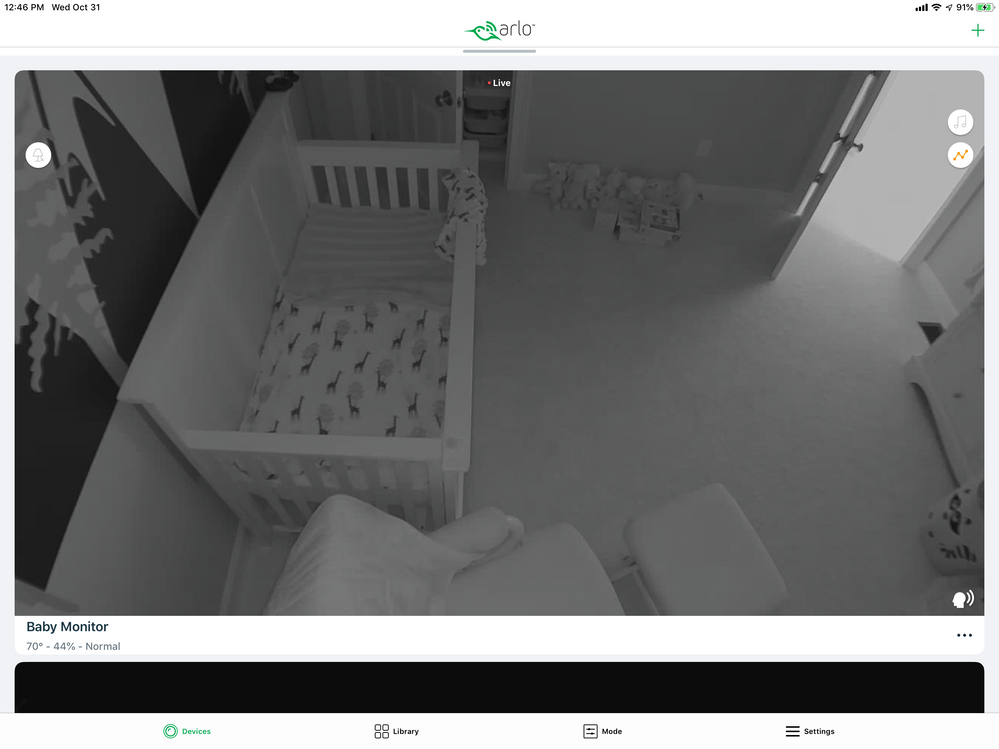 What version of IOS are you running on your iPhone?

Aspirant
Since the last firware update my “live” view does not work on the app on my ipad.. I can hear sound but the picture does not show a live view of what the camera is seeing. Pretty scary to not be able to see what is going on. This only became a problem with the new update.. Please fix asap. I have uninstalled and reinstalled the app a couple of times on my Ipad but that didn’t help. Rebooted my router and the camera base station. A few times too. Nothing changed.. Also on my android phone this is not a problem. So it appears to be related to the ipad app. only. Anyone else have this problem? Suggestions to fix. Other than what I’ve already tried would be greatly appreciated..
0 Likes
Message 108 of 208
4,013

What iOS version are you running on your iPad Pro? Have you also tried reinstalling the app to see if the issue still happens?

I have done all the usual uninstalls and reboots...nothing works.

Live view is still not working on iPads. I had planned to watch for trick-or-treaters since my doorbell quit working. Since Arlo still hasn’t fixed this major bug with the iOS app, I thought I would just watch live view via the web.  Well, apparently the web viewer is still using Flash player in 2018, so I couldn’t view on the web. Together with the very bad new iPad layout for the app, my Arlo system has turned to pure poop.  Is Arlo doing anything to fix the app for iPad?

Guide
Arlo seems to be failing in every way imaginable. My cameras are all but worthless now. I will ask, however m, have you updated to iOS 12.1? It just came out yesterday. Not 12.0.1, but 12.1. Arlo had to wait for Apple to fix the problem for them, but, alas, now my cameras have a 1-2 min. delay from detecting motion to sending me a notification, and a full 20 min. delay before that recording is posted in my library.
1 Like
Message 113 of 208
4,341

Well it’s been a week now and...nothing.  I am having the same problem here.  iPhone X works fine but IPad Pro only plays sound and no live feed.  I did contact customer service and explained this but they wanted the serial numbers to my cameras for god’s sake.  I kept telling them my problem simply and it just seemed to bounce off their head.  I really don’t get it..such a good product and absolutely crappy customer service.  Just reverse this last update!  Fixed!  Plus..this last update enlarged all the feeds, which I don’t care for.  I much preferred the smaller picture which I could enlarge myself if I wanted to.  PLEASE FIX THIS..

Yes, I liked the other version were it displayed all your cameras in one screen as well.

As an early adopter of the Arlo products I have invested a lot of money into this system. As a business owner, the fact that I’m still not able to view my security cameras live from my iPad Pro after the latest updates is absolutely ridiculous. Arlo went from a decent app to one that is not functional for a lot of people.  From what I’ve read most people don’t like the changes anyway. Please fix these issues now so I don’t have to return my hardware and switch to another vender that cares more about its customers.

The ball is in your court Arlo. Show your customers that you truely value them.

Firstly in answer to your question, I, along with many iOS users have been using iOS version 12.1.   The live video streams do NOT play on an iPad Pro (using your App varsion 2.6.1, but they do play on an Iphone 6S running iOS 12.1.   Arlo is now useless for anyone owning an iPad Pro.

The bigger issue here is that there are literally thousands of posts here in these forums, Facebook, Twitter, and on the App store itself deriding the latest upgrade of your App as being a serious downgrade.   It's a 100% FAIL according to feedback over now two weeks.   Yet Arlo have continuously failed to acknowledge there is a problem - (it's not just the live streaming) with the new version of the APP.   As a minimum your user base would expect a comment like "Sorry we messed up.  Here is the old version 2.5.5 back for you to use until we sort out the problems with version 2.6.1.

Same issue here. IPad Pro App not showing live video. I can hear the sound but the video is frozen. I have restarted the base station and uninstalled the app and reinstalled it without success. My iPhone XS Max works fine, both running iOS 12.1.

The issue still exists on iPad application even with iOS 12.1. This issue must be with the update to the iPad Arlo application. My iPhone with iOS 12.1 works. I have sent a message to support and waiting for a response.

I have updated my phone and two iPads, still only an issue on my pro 12”

I just got off support chat with Arlo and they have "no ETA for the fix".

Time to shop for another product.

No, not resolved for IPad Pro.  Thinking ahead and efficient use of my time, let’s hope they fix it for the new IPad Pro, too. One fix.  Go, Arlo Team!

Same problem as others:  Have latest app and ios software.  Video frozen on ipad pro/iphone 6S.  It works fine on my desktop.  Surprisingly, it also works when I go to Device Utility and select camera "positioning"!  Arlo, if you only knew the countless hours I've spent trying to make your system work.  I've deleted all devices and software plus changed the connectivity on my router - more than once!  If your company cannot field a dependable system you shouldn't be putting it on the market.  As a minimum you should notify all registered users of the problem and keep them advised of status of fix.  That would be true customer service and earn you a bit of loyalty.