Cloud activity zones not working on Arlo Pro (NOT Pro 2)

I recently upgraded my Arlo Pros (not the Pro 2s) from the basic plan to the Arlo Smart Premier plan and am having issues with the motion detection zones.  I can create them with no issue however it seems as if they are being ignored.  One of my cameras is detecting motion (and subsequently recording unwanted video) in areas of the field of view that are blatently not in the activity zone.  I have not had a chance to test my other camera to see if it is experiencing the same issue.  Has anyone else experienced this with Arlo Pros using the smart features?

Consider a base station reboot, allow the base station to come back online and try again. Do you still experience the same behavior?

Consider a base station reboot, allow the base station to come back online and try again. Do you still experience the same behavior?

Yes, after a basestation reboot motion outside of the activity zone still sets off the camera.

I have the same problem. I have noticed when first logging into the mobile app that cameras live field is black and says that ac power has been disconnected so motion zones have been disabled. It only stays there for a sec then goes away. This is a big selling point for Arlo Smart. Seems that its currently broken. I hope they can get it fixed or i will not be renewing.

Can you provide a screenshot of the zones you have set up? One thing you can try is bring the camera into a controlled environemtn (like an empty room) and test to see if you still have the same behavior. 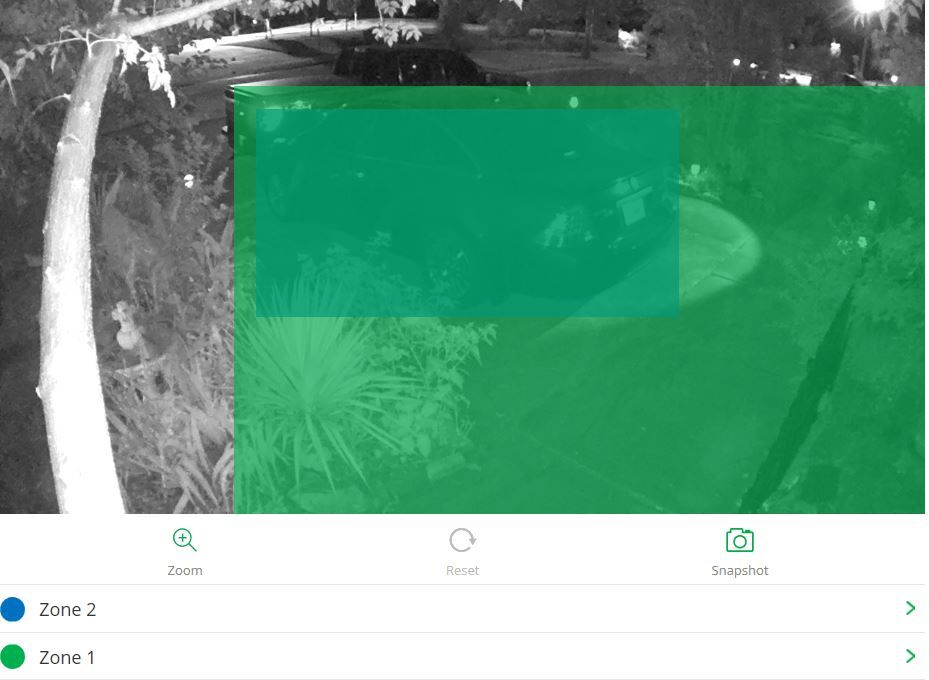 Here's a pic of my zones. It still goes off for cars going by on top of the screen.

Can you provide a screenshot of the zones you have set up? One thing you can try is bring the camera into a controlled environemtn (like an empty room) and test to see if you still have the same behavior.

Is there any more direction on this issue besides rebooting which doesn't fix the problem?  I am having this issue as well. 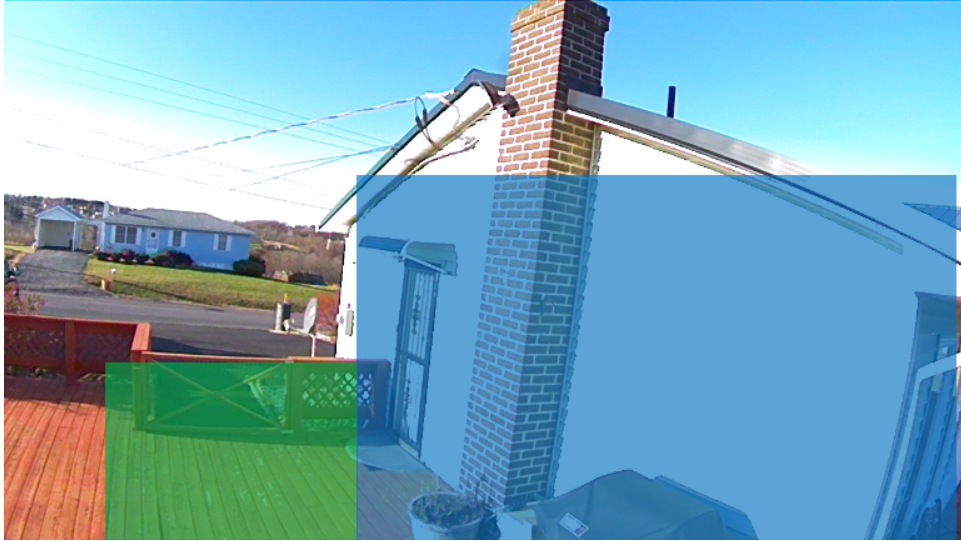 I just installed a brand new system on 11/24, so the app is current.  What's happening is that motion is detected outside of the zones and then a recording is made.

Can you try and remove the zones and create them on the web portal then test again. Are you having an issue with vehicles outside of the (green) zone?

I decided to give the 1-month free trial a test to see if I could remove all the false alarms, unnecessary recordings and wasted battery use I've had since the system was first installed.  It is not working as advertised and unless it does work, I won't be continuing the "Premier" plan after the trial period expires.

I'm so disappointed with Arlo's ability to have decent user-control over the cameras.  The whole thing about rebooting the Base station, only setting up zones on the mobile app, etc are just wrong-headed support thinking.  Make the product and its controls work without asking the customer to do these odd-ball tasks.

I had some success doing a complete re-boot of the base station.  Apparently there's multiple types of re-boots.

However, if you stick a paperclip or something else in the reset button on the back of the base station and hold it for 30-35 seconds it does a different re-boot than simply pressing it for a few seconds.

So what has worked for me is remove cameras and base station from the account, do the full 30 second re-boot on the base, re-sync camera, re-enable activity zone.  I also found that I'm really only able to use one activity zone.  As soon as I add multiple activity zones I start getting the same issues.  I've also noticed that the activiy zones seem to work better when they're somewhat smaller.

Occasionally my system will work for a week or two and then I notice issues again and I need to re-boot.  Far from perfect but its manageable.

The primary problem I have now is that it occasionally misses people.  Will get them coming but not going or visa versa.

Arlo smart and the motion sensors on the cameras certainly need a significant amount of work, as these are well known problems and arlo support really has no fixes short of the re-boot.

Thanks for your reply as I know that you are sharing what youve done.  What you are having to do is basically my point about why the Arlo engineering team owns the problem and should fix it.  Suggesting to their  customers that they need to reboot, deinstall cameras and basically have to go through all the stuff they did to setup the system is not an acceptable solution and it doesn't really work for many that have done it.  It only points to the fact that the Arlo product(s) are not working as they should and have problems with their own advanced (fee based) software tools to manage same.

Arlo needs to seriously step-up their game on post-sale support because they are losing customers that spent a lot of money on these products and word gets around.

I just set up and installed a Pro2 system yesterday. I have the same problem with motion detected outside of activity zones. I have 2 zones set up on each camera. The zones were set up on Arlo Smart on my laptop.

When i go to the phone app, and go to activity zones, there's a warning that the cameras need to plugged into an electrical source to set up the zones.

Has anyone tried that??!!

Also, i have not joined the premier Arlo Smart but i have activity zone options. Is this just a limited trial? I didn't get any warnings about free trials.

ok i will try again, but seriously, your product doesn't work well. I wish I hadn't purchased it.

I removed and readded the zones.  Same issue.

What Device/Model/OS are you experiencing the issue with?

What version of the Arlo Mobile App are you running?

I have a couple of Arlo Pro 2 cameras with the Premier Plan. In the past, activity zones have worked just fine. However, recently, they appear to have stopped working. I receive notifications all the time for vehicles and people outside my set zones and it's burning up my battery.

When I try to set the zones in the app, I see a) a very outdated camera shot and b) a message saying "To enable Activity Zones, please connect your device to AC power."

Anyone else seeing this? What's going on here?

I thought that they enabled activity zones without being pluged in just over a month ago.  Did they take that away again?

Zones while battery-operated are for the Smart feature.

I cannot get the smart zones to work, I only recently subscribed to the smart package so admit I may be doing something wrong.

Im using Iphone 6, latest Arlo update, not sure how to check is the Arlo base station is up to date but I did turn it on and off again, maybe Arlo push the update anyway?

I created the zones, and as soon as I have a smart zone, the camera is not detecting anything, am I supposed to do something else once the zones have been created to enable them?

I would really like to use this feature as this specific camera is on the entrance to the house and the road is constantly activating the camera.

The chat representative told me that I had to unsubscribe from Premier, which I've been subscribed to since July, and resubscribe to Arlo Smart Premier. Apparently they weren't able to migrate customers between the identical plans. These activity zones used to work, but since the roll out of the new plans they don't work. I unsubscribed and resubscribed and then waited for more notifications to roll in.

After it became obvious that the activity zones still weren't working after the resubscribe, I called customer support. The first representative was able to "confirm" that my zones weren't working and transferred me to the "Concerns Department". I'm not sure if this department exists because after 10 minutes on hold I was back talking to another front line support rep. This rep was also not able to fix this issue nor had anyone to transfer me to.

I'm not sure which is a bigger joke, this "product" or Arlo "support".

Join the club!  I’ve subscribed for smart zone coverage for the past 2 weeks and it simply doesn’t work.  Don’t drive yourself crazy.  It doesn’t work.  I’m hoping that Arlo will choose to fix it soon.  Otherwise, I’m unscubscribing.

Smart notifications and zones not working at all in Australia after finally getting the updates on the app to be able to use it.