Re: arlo will not load video from library on my pc

Some details would be nice.

I'll guess you're using a W10 PC with Edge or IE. MS did an update that caused this to happen. Use Firefox or Chrome.

There's another thread started on 2018-08-16 by Fotog with the same problem. You might want to look at that discussion.

The development team is currently investigating this issue. As a workaround temporarily you can try using a different browser or do the following: 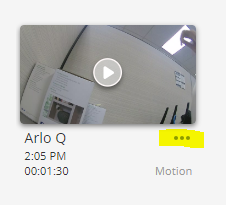 Does not work on Firefox either. Using Windows 10 current updates and Firfox 61.0.2 64 bit.

Just tried FF here on a similar setup with no problems. Try restarting FF and/or reboot the computer.

Does not matter, it has been like that for over a month.  Brand new Samsung laptop Windows 10 current undates and Fire Fox 64 bit version current updates. I reboot daily.

I have FF working on win7, didn't try on win10. But, after viewing many videos in a row FF all of a sudden says "you have arlo open in another tab....." and of course I don't. I have to then hit the back button which takes me back to the library.

The work around that @JamesC posted works perfect for Edge in win10. A few extra clicks, but works for now.

Usining WIndows 10 PC and switching my browser from MS Edge to Chrome enabled me to view the  videos in my library. Before that they would not load no matter how long I waited.  Thanks for the advice. Hopefully Microsoft will fix this bug.

Did Arlo ever find a solution to this problem?  This is causing a major problem.  We've had a theft, and I can see the videos I need to provide the police with, but they won't play.  I can't download and play them either.  If there is no fix, I would like to know asap, so I can get a better system in place.

I use the Chrome browser and all is well. From what I hear the problem is a windows issue stemming from their last OS update a month or so today. It did not affect the streaming on mobile devices. If the Chrone browser does’t work for you download the Arlo app and save the video to your photos and send / upload it to the authorities. Good luck and I hope they catch the crooks.

What browser are you using to view the videos?

I am currently using Google Chrome

Any status update on when we'll be able to play library videos with Edge?

Just started working with Firefox a few days ago.

I refer to another thread https://community.arlo.com/t5/Arlo-Q/Arlo-Q-Videos-In-Library-won-t-load-for-viewing-in-Internet-11/... where the matter is listed as solved and thread closed:-

These 2 KB’s essentially addressed the same issues in the 2 different versions of Windows 10 currently being supported.

Microsoft Edge did not start playing videos again from the library until around 21st Nov 2018  so for JessicaP to infer that release of Microsoft's OS Build 16299.785 fixed the problem is highly misleading. It may be that Arlo were waiting for release of these Microsoft updates before they applied their own fix but this is not stated nor is the reason for the problem in the first place.

Regardless, I am pleased that the issue is now resolved and my thanks to all concerned.

Exactly what I was going to post last night but all the "edge not playing video" threads got locked (except this one I guess). Makes you wonder.......... Anyway, you are exactly correct with your dates and versions. A recent MS KB did not magically fix edge, Arlo fixed their website. Maybe they were waiting for that KB for 1803 and 1709 to then fix the website, maybe both the KB and a website fix were needed, idk, but those posts claiming a KB for version 1709 fixed the issue are highly misleading, especially since the vast majority of people are running 1803 or 1809.