Hope everyone is keeping safe and well.

Since the early hours of yesterday morning (25th April) UK time all of my Arlo Pro cameras have been suffering from extreme pixelation in both live view and motion detection recordings. The location of the cameras and base station have not changed for months.

I have checked WiFi strength using an analyser and all is good. All cameras have three bars in the Arlo app.

One of the cameras is within ten feet of the base station with no obstructions and is suffering the same.

I have noticed that a camera firmware update was issued in the last few days. Are there any known problems that could have caused such a drastic change in system performance?

Apprentice
Nobody seems to notice that I have issues with my doorbell too. The whole system blows now.
0 Likes
Message 251 of 531
2,491

Sorry to hear abou the doorbell too! Strewth, this is just a mess.

We're now looking at the Reolink Argus wireless camera, half the price of Arlo. Just reading reviews and forums first!

Retired_Member
Not applicable
If they dont want to ruin their rep they should update the base stations to be used without their servers. Its possible to do. Rather than downgrade all our systems as they have done. Im out approx $2000. Im not even so mad about that i just made my little sister spend approx $700 on her arlo for her new house a few months back too late to return it and she hasnt set it up yet cause she is just moving in. This is really **bleep**ty
0 Likes
Message 253 of 531
2,484

@Manolo86 wrote:
Complex scenes.... So anything that passes in front of my Arlo Video Doorbell (full signal) is a complex scene?

I have never heard anyone calling motion picture/video a "COMPLEX SCENE". That is the dumbest thing I've ever heard in my life. This is serious business. Are they trying to make fun of us?

Retired_Member
Not applicable
Well lets see first they blamed our wifi, which it doesnt use. Now complex scene. I believe they think we are all stupid.
0 Likes
Message 255 of 531
2,474

I really don't even care about cloud storage all that much. I just want access to my local storage wherever I am. The problem with that is that they can't even get that right. I had to disable port forwarding because it would screw the app up and use 85% of my battery. Not to mention the base is intermittently not recognizing my flash drive since the 5/4/20 update. I chose Arlo over other brands for the local storage option. The system is useless to me until they fix that and the pixelation.
0 Likes
Message 256 of 531
2,460

Guide
Please keep us posted on any research into alternate brands.
I have also looked at Reolink and Ezviz and am trying to find a completely wireless system with good video resolution. I don’t mind paying a monthly subscription for service as long as the video is decent quality. I will not upgrade to the new Arlo Ultra given my disappointing experience with my new Arlo Pro2 system. Arlo should fix the problem they created or refund our money for these cameras.
View products (1)
1 Like
Message 257 of 531
2,456

My video gets severely pixilated at precisely the times it's needed to be at its best. Until this is fixed we cannot recommend Arlo, or post good reviews, or consider updating our systems to newer Arlo cameras and paid subscriptions. In the long run this will cost the company more than it saved. Whoever authorized this has done immense damage to the Arlo brand....

Thank You for your reply, @JessicaP .  You must've drawn the short stick - sounds like you're forwarding someone else's answer that only partially addresses our concerns.  One thing it does make clear is that this was done intentionally, it was not a programming error.  But it still leaves unanswered:

As many have stated, the video quality is now terrible and unacceptable.  A good interim solution would be to roll back to the firmware version(s) in place in early April.  If circumstances require that video bandwidth or cloud storage be reduced, PLEASE work with your customers prior to implementing a change so that a reasonable compromise can be reached.  Conduct surveys, request suggestions, that kind of thing.  I think your customer base would be a lot happier.

Apprentice
I submitted a complaint due to an issue I was having with the Zoho app. This was their response the same day:

"Hope you are doing good. Thank you for contacting us.

Sorry that you are facing an issue with the Zoho Mail mobile app. I'll have this checked and get back to you with an update."

Appreciate your patience in this regard."

6 days later and this was their update:

"Thank you for your patience.

We have identified an issue with regard to the scenario that you have reported and our developers are currently looking into it. We will have this addressed in our future updates. I sure will followup with them and keep you apprised as and when I have any news for you on this front.

Thank you for your understanding."

That is how customer support is supposed to work! Holy crap am I impressed. I'm sending a 5 star rating their way. Arlo needs to take this example and use it in their customer support training model (assuming they have that). Hopefully Zoho will break into the surveillance camera market one day.
0 Likes
Message 260 of 531
2,425

Here's a link to a decent primer on video compression and the handling of "scene complexity."

@JessicaP  You cannot seriously have read all of these posts and then come up with this for a reply? This is a complete cop out.

So Arlo advertises my doorbell as 2K and people look like my old NES games when they walk by because it's a "complex" scene. It's a doorbell, everything that passes by will be quick and close! They sabotaged their own products. They can't even spring for a more robust server or something? I feel this company is doomed. What a waste of time and energy.
0 Likes
Message 264 of 531
2,364

Didn't Apple get into some trouble over doing something similar to their phones?
0 Likes
Message 265 of 531
2,346

No not legal at all, we bought a product that is 1080 it is to be that for the life of the product.

I spoke to a lawyer friend on mine about this and told me when ever I want to get the ball rolling on this to just let him know.

Retired_Member
Not applicable
We should all get together and one big lawsuit so they feel it, hopefully enough ppl to make them close down
0 Likes
Message 268 of 531
2,340

Didn't Apple get into some trouble over doing something similar to their phones?

Yes they did they install and program to kill the battery and slow the phone down over a certain time to make you go out and buy a new phone. This is more or less the same thing.

Tutor
Apple reduced the performance of phones with older batteries to prevent them from shutting off randomly (because the old batteries were no longer able to provide the necessary power to keep the phone running). Their misstep was not *allowing users to choose* between decreased performance or allowing the phone to just shut down randomly.

Very different than purposefully nerfing the video quality of your camera because they can’t afford the bandwidth or storage costs...
0 Likes
Message 270 of 531
2,332

"Eufy
Looks like arlo, works like arlo but focuses on local storage in base unit using sd cards made by anker"

The one thing I see about Eufy cameras that I didn't like was that their cameras cannot be viewed via your PC.
To me that's a deal breaker.

Guide
About a month ago I noticed that my cameras are basically useless. Pixelating video is horrible. Sorry I recommended arlo to family members.
View products (1)
1 Like
Message 272 of 531
2,325

@conma wrote:
About a month ago I noticed that my cameras are basically useless. Pixelating video is horrible. Sorry I recommended arlo to family members.

Same here I recommended the system to family members and a friend which all bought the system pro 2 about 8-9 months ago and now iam hearing crap about it, wish I never did now. WE NEED ANSWERS !

I have a bunch of Wyze cameras, too. The video quality on a $20 Wyze camera absolutely blows away my Arlo 2 Pro. I'm not exaggerating at all. Wyze doesn't make any direct competitors to Arlo—yet—because their cameras require USB power (I use mine indoors). But they will soon release an outdoor model and they recently released a preview. I like Wyze because they cost a fraction of their competitors and they are far more transparent and communicative with their users.

If the Wyze outdoor camera is as good as all the stuff they've released thus far, I will be ditching my Arlo junk for them to cover the exterior.

This issue has really put Arlo's problems under an x-ray machine that some of us have been on this forum for years talking about:

2) Complete lack of transparency on firmware updates. The last one that causes all of this literally said "Bug Fixes". I've included a picture from Arlo as proof.

4) "Gurus" on this forum who tell you it's your router or WiFi, wasting endless hours of people resetting their systems. Just stop it already. There are clearly some very intelligent people posting on these boards, and every voice matters regardless of post count.

Since Arlo needs cloud server space (the only logical reason they'd increase the compression a ridiculous amount), let us all utilize local storage instead. I'm more than happy to give you back your cloud storage in return, and I bet there are many others like me. 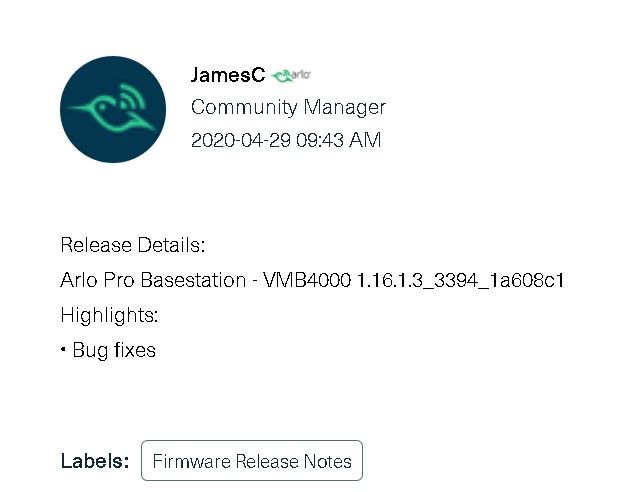