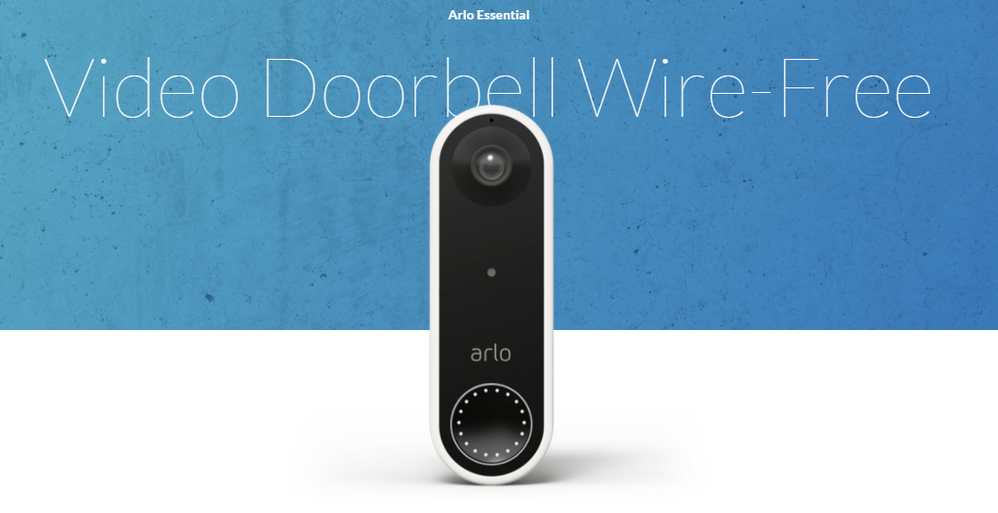 For more information on your Arlo Essential Video Doorbell Wire-Free and some other helpful resources, check out the links below:

If you have any questions about the Arlo Essential Video Doorbell Wire-Free, post down below and we'll get to each one as soon as we can. If you need additional help, visit Arlo Support for more articles and resources.

Thank you for being part of the Arlo family!

I don't see the bell included in the package. How will we know when someone press on the doorbell?

Does this needs a subscription to Arlo smart?

It will call your phone on the button being pushed. Yes, like all recent cameras, subscriptions are needed.

So it seems from the tech guides I could find that the Arlo Chime can be used, but that requires the basestation.

So as a new user, i'd have to buy the doorbell, a chime, and a basestation just to get an audible chime?

Or use your existing chime, if one exists. This doorbell can run on batteries or be additionally wired to existing doorbell wiring.

Most other competitor brands like Eufy, Ring has a chime option. Looks like they have a better more complete solution.

Initiate
Could you please share a general time frame for HomeKit compatibility for the doorbell?
View products (1)
4 Likes
Reply
Message 7 of 44
35,182

I have a previously wired doorbell with power, but no chime box. Wire fell behind the wall and I don't feel like fishing it out. Can the wireless doorbell be wired but with no chime box for constant charging or is the best option just to go wire free and manually charge the battery?

Assuming it wasn't the doorbell wires that fell behind the wall, either way will work. The battery lasts a long time but the doorbell has to be offline for recharging unless you have a second battery. Otherwise, the wired solution should be good.

Will this doorbell be included in any Black Friday/Cyber Monday-type price reductions or in any bundles?

I would be very cautious about purchasing the video doorbell.  I have the first version, and have had nothing but problems. It does not play well with my existing house chime -- causing a constant buzzing.  So, after several months of help from Arlo, it's come down to having it bypass my chime. So the only way I know my doorbell is ringing, is if I have my phone on me.  I have  an older base station (1 year old; not that old) which does not connect to the Video Doorbell, so I have to pay for Arlo Smart subscription (it's cheap; but still, annoying, when I have a base station and 3 cameras in the house)

Summary, do your homework before purchasing (and I would NOT recommend purchasing).  Know that you have to have a certain model of base station for it to talk to the Arlo Chime and to the Arlo Video Doorbell.

And, I just spoke w/ customer rep re: this new Wire-free Arlo Video Doorbell -- it is NOT compatible with the base station as of yet .  So, you have to purchase the Arlo Smart subscription; and because it does not connect w/ the base station, it will not talk to the Arlo Chime.  Seems kinda crazy to roll this out, when it's not fully compatible!!!

Luminary
Arlo wireless vídeo doorbell.
AVD 2001- is not an option for the subject line.

Thanks for sharing the informative blog

@GadgetGuy wrote:
I just received my new AVD 2001. And the battery has been charging for over 2 hours. Should it take that long? Still red.

It takes 5-6 hours to charge. Compare the battery specs to other Arlo batteries and you'll see a big difference.

@Kpl9988 wrote:
Im being told I need a $99 firmware update since I have a 2.4/5 ghz wifi network. This doesn't seem right. I think I will be returning my wireless doorbell.

You Googled for support, didn't you. Arlo doesn't charge for any support. Use the Contact Support link at the bottom here.

Thanks for sharing the informative blog. For any further information, let's connected with us at

It's not at all clear that anyone should go there. For all we know, this is a scam/phishing/whatever site.

Luminary
Good to know. Thanks for answering. As of now, the device is working very well. I am an early adopter (had the Vue cameras, Arlo 1 and 2. This is by far the best device. I can actually talk with people right after they ring it.
0 Likes
Reply
Message 20 of 44
34,847

Tutor
I already returned the doorbell to Best Buy. It is too frustrating when companies make devices that only connect to 2.4 ghz networks. It's 2020 where 5ghz networks are common. Hopefully Arlo will make a better version next time.
1 Like
Reply
Message 21 of 44
34,842

Luminary
Interesting.
I had issues in the past with the amazon plug not connecting to 5 gz as well. Since I use the Orbi mesh network I had to change some configuration to have the plugs connect to Orbi at 2...
But this camera connected right away to my Orbi. I was a bit surprised. Maybe Orbi had a firmware update the allows devices to connect to one or the other automatically now.
0 Likes
Reply
Message 22 of 44
34,838

Luminary
Arlo and Alexa.
Here to report that I tested all my
Alexa devices, and as soon as you press the doorbell button, all the devices play the ring tune of your choice. And it announces that someone is at the front door.
Having another device to get a bell ring does not make much sense any longer. Assuming you have Alexa devices.
1 Like
Reply
Message 23 of 44
34,823

My new wire free video doorbell does not associate with the base station at my home address. It appears as a separate device with its own modes, schedules, etc. I would like to connect it to the same network as my other Arlo cameras and a wired video doorbell and an Arlo Chime, but the mobile app requires that the doorbell and the app be on the same network (in my case the SSID is ARLO_VMB_xxx, where xxx is the serial number) for setup, but I don't know the password for that network.  The ARLO base station apparently uses just a network password (which I don't know) in a scheme similar to WPA2. My home network, however, uses Enterprise type security via a RADIUS server which uses a network login name and a network password, but the mobile app does not have a place to enter the user name, only the SSID and network Pre-Shared-Key. Bottom line is that I cannot attach my doorbell to my home network, but I have been able to attach it to a utility network outside my firewall. Needless to say this a security issue which I do hope that Arlo will address soon. Under this configuration the wire free doorbell does ring the Arlo chime, but I do notice an extra second or so delay as the wire free signal goes to Arlo Central and back, when compared to the wired doorbell which is directly associated with house's base station.

Since the wire free doorbell is actually on an external network the audio/video connection also isn't working correctly, but I am reasonably sure that if we get it on the same subnet as the base station it should work the same way the wired doorbell does.

Also, pre-sales advised me that the wire free doorbell would work with my existing chime, but in retrospect I think the agent heard the word "Chime" and thought "Arlo Chime." I have a traditional style mechanical ding-dong chime similar to that found in most 1950's houses, and the wire-free doorbell will NOT work with one of those UNLESS you run a pair of wires to it and install an Arlo power-kit like the wired doorbell uses. And running the wires defeats the whole purpose of buying the wire free doorbell in my case, as a previous homeowner managed to trash the wires inside a brick wall during some inspired remodeling.

Are you running into problems like these?  I think all of mine will eventually have a network solution, but the roll out of this has been less than stellar for me.

I totally agree with you.  I have just purchased the Essential Wire Free doorbell and totally disapointed at the lack of integration.  I purchased a VMB4540 Smart Hub as well and found that it doesnt pair etc.

I dont have as complicated network (No Radius etc) but share the same thoughts.

I was just on a Support Chat Session about wether or not this doorbell can use the Arlo Chime. I am still confused.  As the doorbell cannot pair with a base station, will it connect to an Arlo Chime.  I got various answers from the Suppor Chat Person from Yes, No, Maybe in the future.

We just tested answering the doorbell on a samsung phone on 4G (as the App wont login in on Home Wifi) and the video footage was terrible.  Big Grey box and video pausing, poor sound. etc.  Think I should have purchased Ring instead.