I'm getting close to pulling the trigger on a purchase. I figure three cameras: two in front, one in the rear covering the deck area (it's a small postage-stamp builder deck, basically a platform for the grill). The rear location isn't that tricky because the roof is low back there.

Where I'm stumped is in front. The house is on a cul-de-sac; the front lawn is maybe 40' deep. The attached pictures aren't actually our house, but are the same model. 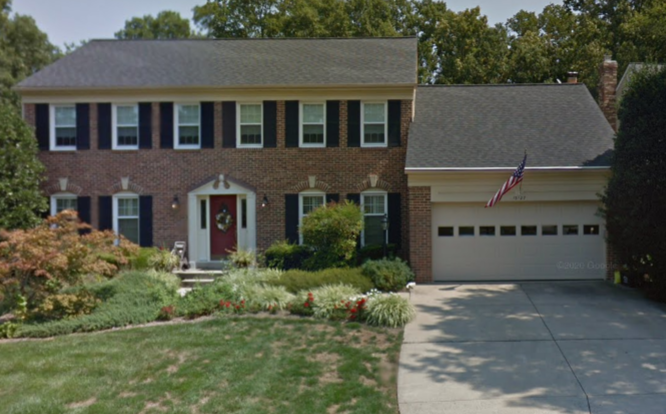 My thinking is that I put one on the left front corner of the garage, angled so it just catches a bit of the street, or maybe not even that. With that in motion-detection mode, it shouldn't get triggered by every random car. Then I put the other one basically in the same location but 90 degrees left, so it's covering the front of the house.

Does this sound reasonable? I'd rather not have to tinker too often with the placement of the mounts.

Remember that the PIR for the camera will detect people to about a max of 25ft.... ( pics not visible yet )

So placement is very dependent on where/what your trying to capture.

Avoid Arlo Ultra at all costs.

I’m on 28 days of my Cameras (8 of them) and Base Station not working with no resolution in sight.  Arlo has known about this issue since April 4th, they said it would be resolved in 24-48 hours, they won’t send me any replacement equipment even though I’m within their 1 year warranty period and it’s been 2 weeks since I’ve heard from their “Support Team”.

Motion Not Being Detected

Look at their Facebook page….  Plenty of unhappy customers saying the same things.  Look at their Reviews on Glassdoor and other websites.  The common theme is crap product with crap support yet you don’t find this out until you’ve purchased the product.  Folks come here for help/insight because Arlo’s “Support Team” isn’t helping them.  A “Case Number” gets opened and never really worked on.

Here’s some good reading material but as I said, go “Look” for yourself and you’ll see this product and company are not stable.  Buyer Beware.

Wow. That's disheartening, to say the least! Is it all like this, or just the Ultra?

This forum has already paid back the initiation fee 😄

Good advice; I suppose I could tack them up at a reachable distance to experiment, rather than going whole-hog and perhaps being sorry. Thanks.

Your comment makes me think/hope that it's smart enough not to trigger on passing cars. And I think I have 25 feet between garage and street anyway. So that's encouraging.

If you look at the other Product Forums on here you’ll see some of the same “Technical Problems” (Cameras Offline, Cameras not recording, etc., etc.) and the same crappy customer service.  Arlo is essentially on it’s last leg, gasping for their last breath.  The company would need a major overhaul and they don’t have anyone to fund that.  They’re hoping sales from new customers will take care of that but just as they’re picking up a new customer they’re losing an existing customer because of all the problems.  After your first year your cameras will no longer record in 4k unless you pay for their premium service.  And even then you still have the same stability/reliability issues.

FYI…. The motion detection sucks.  I have video of me returning home in my vehicle but never leaving.  My driveway is 90 feet long and the camera is 6 feet from my vehicle pointing directly at it..  I’ve had people walk up the driveway and never be detected.  Yet I get motion notifications from shadows on my driveway from the trees.  Motion clips are classified as Audio clips.  My dogs are sometimes classified as peoples other times animals and often just as motion.  It’s not reliable or consistent.

@GrantLeffler --so, you're not a big fan. Any alternative recommendations? Not sure if that's allowed here--while some might object if it's not, it's Arlo's forum, their choice.

I do have friends with Arlo who seem happy, though I'll ping them again. Have things always been bad? Or is this new?

@Johnny290 No solar panels, looks like? That's a requirement for me. Not gonna hardwire or climb ladder constantly to charge batteries.

And yes, I know the answer may be "There is no good solution".


@Johnny290 No solar panels, looks like? That's a requirement for me. Not gonna hardwire or climb ladder constantly to charge batteries.

Remember, solar panels are there to charge the batteries. They do not provide the permanent power that you need for some  cloud features.

Oh, and most of the people who turn up here do so because they have problems, some of which do not seem to affect other people.  I wouldn't trust this place as the sole source of customer reviews. Check some of the on-line sites and review sites too.

Mentor
Wrong this is the place you go to find out how good these cameras really are. Reviews can be fake
0 Likes
Reply
Message 13 of 22
308
Highlighted

Yea I have not had any major problems with my pro 3 cams just some minor quirks that come with technology. Not to say other dont have problems.

Yes i realize that.

Mentor
I have Arlo Pro and Arlo Pro 2 which I have not had many problems with. It's the Arlo Ultra that they released a firmware that messed up a lot of people systems and it's not the first time they've done that.
0 Likes
Reply
Message 17 of 22
298
Highlighted

Not a fan whatsoever.  The product is crap and their support is crap.

Would you want to go weeks which will soon be months with a nonworking system?  Something you have $2k invested in.  It can’t even do it’s basic function of recording.  I’d be much better off and happier donating the $2k to a Charity that actually needs the money.

Would you want to go weeks without hearing squat from a Support Team that said the Problems would be resolved in 24-48 hours?  I’m sending multiple updates per week so that my Case Number won’t get closed for being “Inactive”.

Would you want to deal with a system that’s so hosed you have to constantly uninstall and install the entire system or parts of it and just hope it goes back to working?

This is the Arlo Ultra product line and it’s “Support”.  There’s no accountability, no answers, just reboot and hope it works.

In regards to “Recommendations”, I’m leaning towards Lorex but my “Needs” could be drastically different than yours.  After 9 months of this BS I’ve realized whats important to me.  24/7 recording to a Hard Drive.  I don’t want to rely on “Smart Logic” to determine if something should be recorded or not.  I also don’t want to have to pay a monthly fee for that data.  Some of their cameras have night vision up to 275 feet, you’re not going to get that out of Arlo.

I’m also not a fan of Wireless Cameras.  I think Hard Wired Cameras have less issues.  This is what you see at most Businesses.  Wireless is generally for the DIY People who want an easy installation.  I bet if you went to the Arlo headquarters you wouldn’t see Arlo Equipment monitoring that location, they most likely invested in a real system.  For anyone worried about “Hardwire Installations’, hire an electrician for 2-4 hours and they’ll take care of all the routing, drilling and mounting.

For now I’m thankful to have my old, expensive but trusted Xfinity Cameras.  What I don’t like about Xfinity is the “Monthly Charge”, after 2 years you’ve paid for the cost of a nice Lorex system that comes with Hard Drives.  The good thing about the Cameras, 24/7 recording.  This is how I know Arlo Cameras don’t pick up all Motion Activity.

Best of luck in finding something that fits your needs and nice House!

@GrantLeffler All good points. I'm kinda thinking that what I really want is wireless+local 24x7 storage. It's a residence, good neighborhood; my wife has severe mobility problems, and gets nervous when I'm out of town and she hears something (so far always just a flyer being put in the door, or other innocent activities). Just realtime isn't sufficient, because it'll take her long enough to get moving and fire up the app that whoever will be gone.

I'm sure wired is better in most senses; I'm thinking that wireless should be "good enough", assuming it works, of course. Plus with her health issues, having someone in the house to wire stuff is a problem too. Plus I've put this off long enough that it needs to be easy for, um, political reasons 😞

And apologies for not having written all this before; not having realized Arlo seems suspect quality-wise, I really  just thought I was figuring out placement!

Which makes y'all's comments even more appreciated, so thanks again. Back to the drawing board. Other comments/thoughts/suggestions of course appreciated.

@Johnny290 wrote:
Wrong this is the place you go to find out how good these cameras really are.

Did you actually read what I wrote?

"I wouldn't trust this place as the sole source of customer reviews. Check some of the on-line sites and review sites too."

Mentor
I wouldn't trust any place as a sole recommendation. But hear this and I have it I don't recommend it I have Arlo Ultra Arlo Pro and Arlo Pro 2 for many years now I would not buy again.
0 Likes
Reply
Message 21 of 22
252
Highlighted


Does this sound reasonable? I'd rather not have to tinker too often with the placement of the mounts.

Back to the original question?

That placement does seem reasonable, though it might depend on the landscaping.  If the camera covering the door sees a lot of bushes moving in the wind or shadows, then it will detect a lot of motion.  If you also have a light in the same position as this house, then it could result in lower quality nighttime recordings also.

Though I think I'd start with the cameras there.  Maybe find a way to temporarily mount them w/o drilling.