Just bought the Arlo Pro VMA4400C and i'm having motion issues. I have 2 cams covering my driveway and they are mounted under the eves of my house. I have no other options as for postioning. Neither cam is head on, both are slightly angled. I have attached 2 pics showing the walking path and where the cam caught the motion. On the 2nd pic I approached the car from the driver side with no motion detected , then back tracked and went between the 2 cars and nothing was detected. Both cams are set to a sensitivity level of at least 90. The cams are mounted roughly at 7ft, cant go higher due to the eves. What can I do to get better coverage? I have read the other posts here, and I have no other mounting options and can't mount on my neighbors house for a better angle.

I bought the cams to watch over the cars as there has been a rash of break ins, but if this is the best I can do I might as well just take them down. I really want this to work, so any suggestions is appreciated. 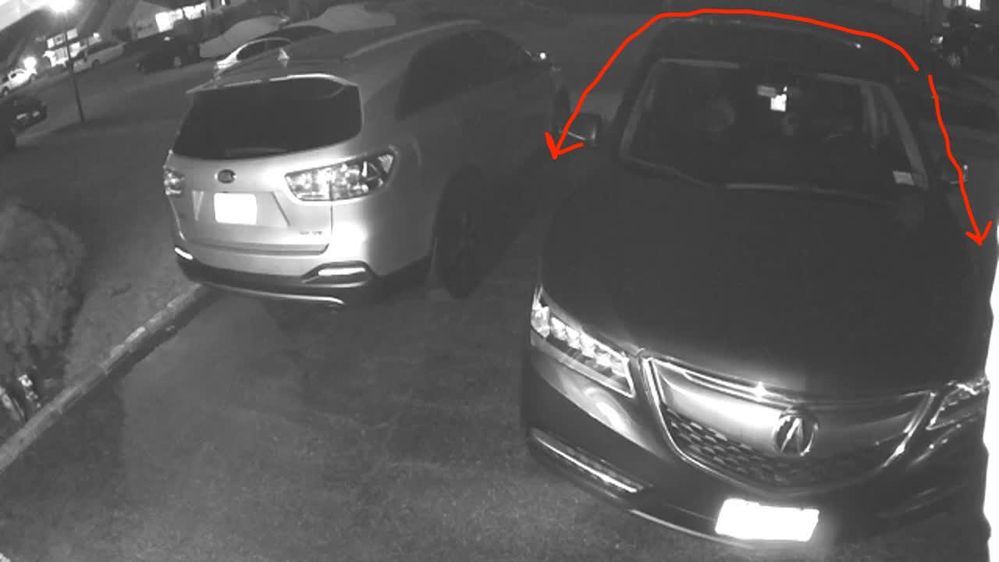 Arrows are walking path from sidewalk and motion was NOT detected

Your pictures won't be available for viewing until they are approved tomorrow. More than likely, the cars are radiating so much IR that the person is not triggering the movement. Will wait to see the pictures before I make any other comments or suggestions.

I looked at your pictures this morning and I agree. you are in a tough spot as far as mounting locations. I don't, though, know of any other camera options that will do a better job, unless you wanted a wired system. One of the problems with Arlo is that until the motion detecting lights come out in May, Arlo does not natively support any motion detectors natively to trigger the cameras from other locations. These lights might be a life saver for you, because they will be able to detect motion from a different area than the cameras and can light up the area to give you better images and deter thieves.

I, (for more reasons than just camera monitoring), purchased the Samsung Smartthings system. I have all sorts of motion sensors under the eaves of my house to trigger the cameras sooner. In the meantime, if you don't go the route of purchasing the Arlo motion detecting lights, at a minimum, be sure you have some motion sensing flood lights to deter thieves.

I can't tell from your pictures, but if you have a window in front of the parking spaces, you might want to look into the Arlo Q or q Plus.

Thank you very much for your reply. I do have a window in front and will look into the Q or Qplus. I am also going to read up on the lights you mentioned. This is very disappointing as I really wanted this to work. Guess I will keep messing around with it and see if I can get it to work.

The problem here seems to be that the heat, (IR reflections), from the cars  is overpowering the IR from the human body.

A couple of things here: try with and without night vision on. There seems to be a light shining from inside the house onto the cars. Again, try your tests with the light on and off.

I will definetly try this tonight! Will let you know if the results are any better.

With some clever disguising, a camera could be mounted in the triangle support of what appears to be your mailbox at the side of the drive. It wouldn't be able to cover the entire scene but, in conjunction with another camera, perhaps in the existing location, you could use netsed rules where one camera triggers a different one in custom modes.