This has got to be the most annoying thing about this setup....

Not sure why, but my station has been changing channel once a day to the same as my wireless router.

Not all users are idiots, so I don't see the reasoning behind not allowing this change.  Is there a back door that allows for this manual change?

Guru
No way to change the channel. It's actually by design for best performance when near your router. If you really want it on its own channel, use a long Ethernet cable or use a WiFi extender.
0 Likes
Reply
Message 2 of 17
7,421

How is it best to be on the same channel as the closest competing router?  I'd like to hear the science on that one.

The reason I bought this was to NOT have to run wires.

By the way, my base station is 15-20 feet away from my wireless router.

The base station is actually plugged into a wired-only router on a different floor.

Guru
Google it - I did to try to understand. I don't know the technical stuff to explain it but it apparently is correct. Having your base a good distance from the WiFi router and having an issue is harder to exp!ain.
0 Likes
Reply
Message 5 of 17
7,389

jguerdat wrote:
Google it - I did to try to understand. I don't know the technical stuff to explain it but it apparently is correct. Having your base a good distance from the WiFi router and having an issue is harder to exp!ain.

Google it.... is that the official Netgear answer?

I'm not a network engineer.. but I am a software engineer.  What you are saying pretty much opposes logic and everythinI have been told and have seen.

Now, if the idea is to be more friendly to your neighbors wireless networks... than I get it.

My answers are never official but are based on experience, what Netgear has posted in various places as well as information gleaned from various sources. Another user here found an Internet article that details why using the same channel as the router is a Good Thing. The link is in the forums for the searching.

It's not for playing nice with neighbors but for play nice with your own router when placed close together.

An option should still be available..

Users should be able to select AUTO or a fixed channel.

Regardless of opinion, I've never seen a wireless router that didn't allow this.  The base station should be no different.

I keep seeing the same response from you guys; that Arlo automatically changes its wifi channel to the SAME one as your home wifi/router (or whichever one is closest).  This does not make sense and needs to be changed.  Having 2 wifi access points broadcasting on the same channel will cause interference, especially if they are right next to each other.  If my home wifi is broadcasting on channel 6, I would want Arlo to broadcast on channel 1 or 11 to avoid any interference

Please add this as a feature request; to be able to manually change the channel Arlo operates on.  it will greatly improve the range and reliability of your cameras, plus cause less interference with peoples home wifi

I am a wireless systems engineer, my statements are correct - it is common knowledge in my industry

I completely agree. Give us some manual setting control.. not all users are idiots.  Lots of us are techs.

And the techie geeks like me should all realize the potential for hacking by opening an interface into the base.

Why not disconnect the base station from the internet entirely if your worried about hacking... kidding of course 😉

My point is that there are some very basic features and settings that are required of these types of products, changing wifi channel is one of them , regardless whether you think this compromises security
0 Likes
Reply
Message 12 of 17
5,953

Using the same WiFi channel is the biggest nonsense I ever heard. I just can't imagine that a company who is supposed to know WiFi comes up with this. Even worse, Netgear is not working on a solution/update. 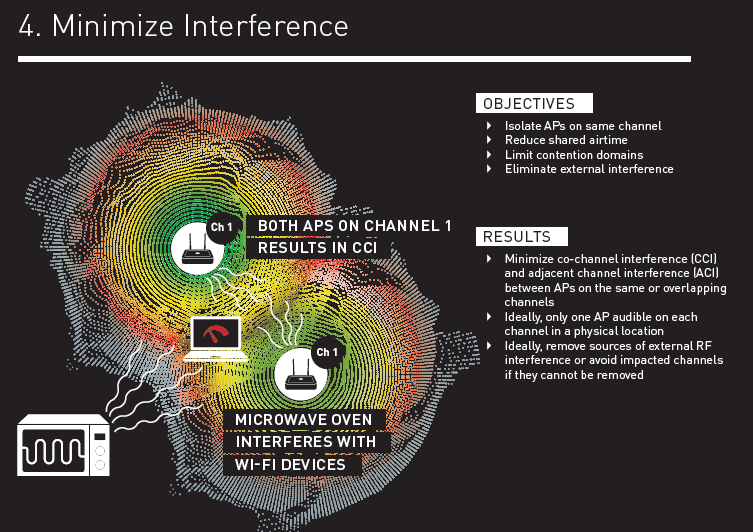 Since I do not use 2.4GHz for streaming 4K TV (or anything else that has 5GHz capability), for me the issue is moot. Having said that, the majority of users probably have their rounters set to auto channel select  in the 2.4GHz band. Ideally one would set Arlo a couple of channels up or down from a fixed 2.4 GHz channel that could cause interference, but since this is a product for the masses to give them the feeling of security, rather than risking overlapping channels, which can be a worse state than same channel, Arlo has chosen to follow the router 2.4GHz channel to avoid overlapping when the router changes channels, I believe.

With the large majority of my toys connected to 5GHz (only printer and garage door LAN connection are lacking 5GHz capability) and no noticable difference in the devices that must use 2.4GHz, this is a non issue for me and I imagine many others.

Having said that, if one uses a fixed 2.4GHz channel on their router (I do not because I have plenty of neighbors on auto) it would be nice if one could set the Arlo channel a couple of ticks away from it, if they were connecting devices mainly through 2.4GHz. They don't and seem to be deeply engaged in keeping the existing firmware and apps working properly.

Aspirant
I would also like to see manual control. I have 3 access points in my home. Before Arlo, my APs were happy being on 1, 6, and 11. When I installed Arlo, I did a scan and saw it using channel 6. I simply shut off the 2.4 radio on my AP using 6. Days later I scanned again and now Arlo us using channel 1 which interferes with another AP. This is a problem. The only way this would not be a problem is if the base and cameras are using 802.11ax which supports coloring. Since it's not ratified yet, I doubt it is. If Netgear isn't going to allow the cameras to work on our existing (and far superior) WiFi networks, they need to give us control so it doesn't screw up our networks. I realize 2.4 isn't used for much, but a lot of my smart home tech uses it (Roomba, light switches, bulbs, etc). The last thing I want is a smart home tech interfering with the rest of my tech. Let's all work together here.
0 Likes
Reply
Message 15 of 17
4,709

Add my voice to those that want a way to set the channel manually.  Even if it means a process of having the Arlo base stations lock onto the channel that my router is set to upon initial setup but stay there when I change the channel on my router instead of following it constantly.

Regardless of Netgear believes in regards to both the base and router using the same channel, I have easily seen where both perform better in the 2.4 range right after I change my router channel and before the base station follows.  Once they "mesh" again, performance drops for both significantly.

I may be outside my return window with my Arlo system, but I definately won't be expanding it until this issue is resolved.

One other issue is that if one could set the Arlo channel, fine for those who know how to do such things. The vast majority of Arlo and main router purchasers just try to plug and play, and auto channel select on 2.4GHz is default. If your router is on auto for 2.4, it picks the best non interference channel. Arlo follows. Those who know what they are doing, it would be fine to lock your channel(s) if you know where your neighbors always are set. However many of those neighbors, or 2.4GHz devices, may also be on auto select. Situations vary. Arlo would need to give access to the Arlo router so as to give them a choice like a full fledged router to also accomodate those who wish only plug and play and not mess around with setting fixed 2.4 channels and also those who have the knowledge to be setting up two distinct fixed channels for both wifi routers and the Arlo base. With all the other issues popping up with Arlo, adding this other variable - and at a cost -would seem problematic