Making sure to post correct information regarding this issue.

1) The problem is NOT ony for Android users as skingspan described.  I have the Alexa app on the iPhone and have properly enabled the "Doorbell Press" option and do not get any notifications via my Echo nor my Echo Dots.

2) Having an Echo Show does NOT ensure that it will work.  cyberr8der indicated he has Echo Shows and can't get it to work.

3) We haven't confirmed, though, whether it does require an Echo device with a screen.  There should be no reason the doorbell requires that since it itself doesn't have a camera, but I'd like for someone from Arlo to confirm.

4) Rebooting systems doesn't help as many have tried without success.

Can we get someone from Arlo to provide an update here?  Thanks.

Guide
Arlo folks don't seem to have much if an interest in helping. I did delete everything and start over from a fire 10 tablet and everything worked as it should. So it my case it may have been my initial setup being from a Android phone. Also, it runs my shows and my 1st Gen echo.
0 Likes
Message 27 of 121
4,138
Highlighted

Glad you got it working.

I tried restarting my Arlo hub, restarting my Echo devices, deleted all the devices from my Alexa app on iOS and rediscovered them.  Nothing has worked.

cyberr8der, can you describe in detail what you mean by deleting everything?

Aspirant
Same issue for me I’ve tried everything and the door bell announcement won’t work on my Alexa. I have two Echos and one Dot. Looking for a resolution
0 Likes
Message 29 of 121
4,063
Highlighted

Guide
I first unlinked my Arlo account from Alexa. (Disable skill) then I went into my devices and deleted everything Arlo related.

At this point you might as well reboot your Arlo hub.

Then from a fire tablet I went into the Alexa app and linked my account (enable skill) then ran a discovery. Once complete I enabled the ring under the newly discovered doorbell. . It worked there after.
0 Likes
Message 30 of 121
4,061
Highlighted

Aspirant
Have the same problem. Just installed the doorbell but no option in Alexa to enable announcements. Tried removing the skill and devices and rediscovering several times. Primary reason for moving to the Arlo doorbell.
0 Likes
Message 31 of 121
4,089
Highlighted

I have an Echo Show, Echo Spot, and two Echo Dots.  Other than "seeing" that the doorbell is there, I can find no functionality to enable.  For certain, nothing happens when the doorbell is activated, on the Show, Spot, or Dots.  Unless there is some secret, non-documented enabling switch that I haven't found, then this seems like just another product with an empty claim that it "Works with Alexa."  Worth noting that Arlo has only a 2 out of 5 stars on the Alexa skills page.  When I found this wouldn't work with my existing doorbell chime, I was about to return the doorbell and base station.  My wife insists that having it call a cell phone makes it worth having so we can tell when we're on the patio that someone is at the door.  So I ordered the Arlo chime to take the place of our doorbell chime.  It would have been nice if the siren built into the base station could also function as a doorbell chime.  Oh well.  Now I'm into Arlo for $175 for doorbell, base, and chime, and the whole system is disappointing in so many ways...  I think "not ready for prime time" says it all.

Alas I don't have any options other than enabling the doorbell.

Our development team is aware and currently investigating the issue where some users cannot see the option to enable announcement for Doorbell for Alexa or the Doorbell announcement will not work with Alexa. We will provide an update as soon as we have more information to share with the community. We appreciate your patience and understanding.

Aspirant
I was able to get it to work. But how can I choose what amazon device it rings on. It’s ringing everywhere even in my little daughters room. Is there a way to make it only ring on one amazon echo device ?? Not all of them.
0 Likes
Message 36 of 121
3,879
Highlighted

This should be controlled via the Alexa app on iOS or Android.

Looks like Amazon might have finally updated their Echo software to allow switching off ringers per device.   I can’t test this right now unfortunately as I’m not home.  Go into the Alexa app, bottom right hit the Devices tab, then Echo & Alexa at the top.   Choose the Echo you want to silence the incoming ringer.   There is a Sounds selection under the General section.  From the Sounds page, you can disable the Incoming Call Ringer.   See if that works.

My Echos still don't work after trying all of the suggestions in this thread.  Perhaps somebody from Arlo could comment on whether this functionality needs some specific 'chime configuration' - e.g. I have the internal switch in postion III  (since I have no 'real' doorbell chime and have never clicked on 'setup a chime' in the app).

Perhaps this is a factor in the Alexa dance?

First time I enabled the Arlo skill, the Alexa app said it didn’t detect my devices even though they showed up on my all devices list, so maybe that is what the issue was.

I don’t think the doorbell announcement works from my echo dots yet and my original echo doesn’t chime with the announcement. It just announces someone is at the doorbell.

Definitely hasn’t been a smooth process. Keep at it though.

OK.  Either I"m crazy or something has been fixed in the app--or the Amazon Echo side of the app--since I first tried to get Echo devices to respond to the Arlo doorbell.  Now in the iPhone Alexa app, I can go to Devices...All Devices, and Doorbell.  At the top is the name Doorbell, then "Doorbell Announcement" and "Alexa announces a message for a doorbell press", below which is a switch to turn on Doorbell Press.  I don't remember this being there before--but, as I said, I could be crazy!  I switched it on and now, on the Show, Spot, and three Dots, when the doorbell is pressed, I hear an announcement "Someone is at the doorbell."  I guess that's the Default doorbell sound.  I havent tinkered with alternate sounds yet, but it is working.

Disappointment.  I spent $50 on an Arlo chime, because I had only a phone call to announce a doorbell press (my mechanical chime suffered the common endless buzz when connected to the doorbell).  That $50 could have bought two more Echo Dots (2nd gen) and still left $10 in my pocket.  So Netgear, it seems, might be like some other tech companies, in that they're using us, the customers, as the last round of beta testers.

I was having the the same issue. I could add the doorbell to Arlo but Alexa could not find the device. I performed the same steps as above. Disable the skill, reset the arlo hub, from a Fire tab manualy delete the Arlo items and main. Then reenable the Arlo skill and the Fire Tab automatically asked to find Arlo devices and it sees my 3 cameras and doorbell. I then select the announcement under settings/devices and my Show, Echo, and Dot all say "someones at the frontdoor"

Tried all the usual uninstall/reinstall but still no joy..

Would be great to have Alexa working with doorbell in near future, I only installed mine today & moderately happy with it but Alexa bug needs fixing ASAP as was a factor when deciding to purchase this product...

Aspirant
I was having the same issues. Could not find doorbell in my Alexa devices.

I fixed it by disabling the Arlo skill entirely in the Alexa app. Then individually deleted every Arlo Device in Alexa -> All Devices. Then I re-enabled the Arlo Skill, discovered devices and it found my cameras and the doorbell, and I was able to setup the doorbell and successfully received an announcement from my echo and echo dots around the house when I pressed the doorbell.
0 Likes
Message 43 of 121
3,654
Highlighted

I can find door bell in Alexa devices ok, just no door bell press options as is meant to be...

I have tried deleting Arlo skill & Arlo devices & then reinstalling all but still no Anouncements options.... 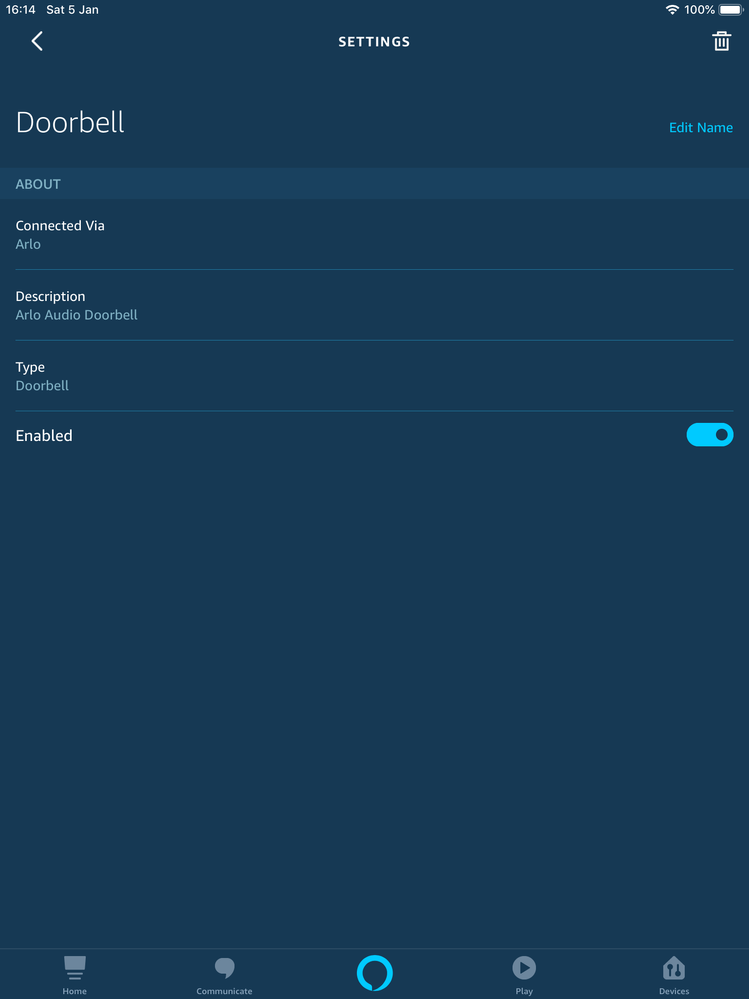 Not sure if I attached image properly but just to confirm,after uninstalling both skill & Arlo devices I’m still not seeing announcements options...the doorbell lists ok in Alexa though..

Aspirant
Under Devices -> All Devices, you should see this screen after choosing the Doorbell. Turn Doorbell Press on.

I have found, however, that if you have the doorbell set to silent mode in the Arlo app then Alexa will not respond to a doorbell press. This happens even if you have Silent Mode on but also turn on the sub settings for call and chime.

I'm a mobile app developer myself. We deal with this kind of painful debugging all day long. I understand how difficult it can be for the developers if people aren't sharing detailed steps to reproduce the issue.

Hope this helps. Arlo devs, feel free to reach out to me if I might be of more assistance. We've done a fair bit of Alexa integrations on our projects.
0 Likes
Message 46 of 121
3,635
Highlighted

Ok tried again removed & reinstalled doorbell from Alexa with both silent mode off & on...both times still no difference... the announcements & it’s toggle just refuse to list with the settings...

I guess I’ll have to wait for next update & see what that brings...

In the meantime many thanks for your input...

Aspirant
Aspirant, did you make sure to remove the Arlo skill entirely from the Alexa app ("Disable Skill" from the My Skills screen) before deleting all Arlo doorbell and camera devices in the Alexa app?
0 Likes
Message 48 of 121
3,569
Highlighted

@stylo wrote:
Aspirant, did you make sure to remove the Arlo skill entirely from the Alexa app ("Disable Skill" from the My Skills screen) before deleting all Arlo doorbell and camera devices in the Alexa app?

None of these steps should be necessary. Arlo and Amazon should work together to resolve this issue so that the process is simple and straightforward for their customers.

I ended up having to buy a Chime, which I think is part of the issue. Arlo has no incentive to fix this problem because they have a ready-made solution for purchase.

I think everyone agrees that none of this should be necessary.  That being said the other users here were just trying to help you get it working.  You're right though, if you are haivng problems and the solution you picked was to give them more money they dont have an incentive to fix it.  I myself was able to get it working without giving them more money using the steps provided here.

Still crappy software but it is working at my house.