So i just got my Video Doorbell Friday. I spent the the time yesterday installing, and setting it up so that I could start testing if i like it and if I am 100% going to keep it. I got it with the promo to upgrade from my audio doorbell with a camera. This provides the unique option to compare the before and after video and in some ways i am impressed and others not so much.

So first lets start with the Arlo pro 2. Of course if just night vision is turned on only the pro 2 the picture is pretty good. There is some lack of definition, but overall it is clear. If the night vision is turned on on both the picture it self doesn't really change, but it lights up a bit and seem easier to see some definition. This is kind of what i would expect. The increase amount of IR should lead to it being able to pick up more IR and create more definition. Now if we turn off the Pro 2 night vision so it's emitters are inactive and just let the emitters from the Doorbell create the IR we are essentially back to what the Pro2 camera showed with just it's emitters enabled. It may be lightly darker. It does appear though that the pattern of the IR being emitted is limited to a circle and so definition is lost in some areas of the image.

Now the video doorbell seems to be very different for it's quality. Simply put when it's emitter is on everything in front of my camera appears to be washed out. and even though the image is recorded in a 1x1 square, It appears the emitter is focused in a circle in front of the camera. For that reason items that may appear in the corners are not that clear. and then because the emitter appears to wash out the image it looks like everything in front of the camera is washed out and lacks definition as well. Now the crazy thing was that with just the Arlo Pro2 emitters on the picture with the Arlo Video Doorbell was great. You could see very good definition.

Now with this said I do have to admit this is what i can see when nothing is being triggered and just looking at a live view. I need to check this when someone approaches  the camera. But this isn't that promising.

I am also disappointed  about the field of view. One of the big things about this camera was suppose to be about seeing the package at the door. Well you can't see what is below the camera or just below and to the side of the camera. I took a tape measure and found that if the package is placed right in front of my door or just to side of where the Video Door bell is located the package has to be about 16" from the wall to be seen. Now i didn't get this with the Arlo Pro 2 camera, but if i wanted to  I could just re position it right.

Thanks for the feedback on night vision, i'll follow up with the product manager on these comments. 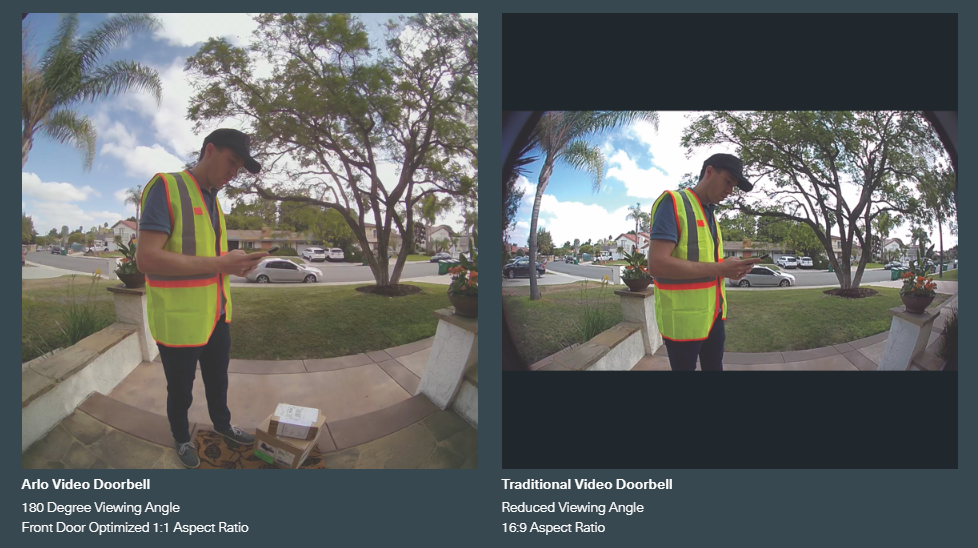 The night vision is a interesting thing. Now that I have had it installed for a while I am not sure I feel the same as my initial impression. It is washed out, but in actual use in my environment that ends up not being to much of a problem. Simply put thought the image appears washed out when just viewing the camera, in a condition where someone approaches the front door the image actually is pretty clear, and even better then the Pro2.

I think part of the wash out is because I have some pillars and other things in the front of my house that are painted bright white. I think it is just related to the white paint being directly in front of the IR emitter and reflecting back allot of IR.

The display ratio is really a matter of preference. I am getting use to it as time passes. One thing i am finding though is that it doesn't take much for a person to be so close to the door they get distorted. I think I may add the angle mount to turn the camera toward the door a little bit more. The reason would be to get less distortion when someone is at the door.  The problem is that would also put the camera facing a wall more. It is a mixed bag.