Have been trying, unsucessfully, to sync a new Arlo Ultra cam with an also new Smart Hub. The Hub is fine, is synced to two Arlo Pro 2 cameras already.

After initially connecting the Ultra, it did an update which seemed to fail (although there weren't any real errors).

- Re-syncing both manually and via the app, multiple times (have spent at least 4 hours over 2 days on it at this point

- Various resets, including a reset of the Smart Hub

Spent about an hour just now with a support agent who has now (alledgedly) escalated the issue. It may be fixed by a software update in the future, but if not it may need a return.

Another snag. I bought the item in the US (Best Buy) while travelling, but am based in Ireland. The support agent mentioned that if this does need to be RMAd, I'd have to ship back to the US at my expense, and they would only send the replacement to an address in the US.

I think the camera is probably defective at this point to be honest. Video of a failed "manual sync": https://www.youtube.com/watch?v=QvvuOk17Q20 (have tried via the app many times).

I'll keep this thread open, as I'm sure this one is going to get all kinds of messy. 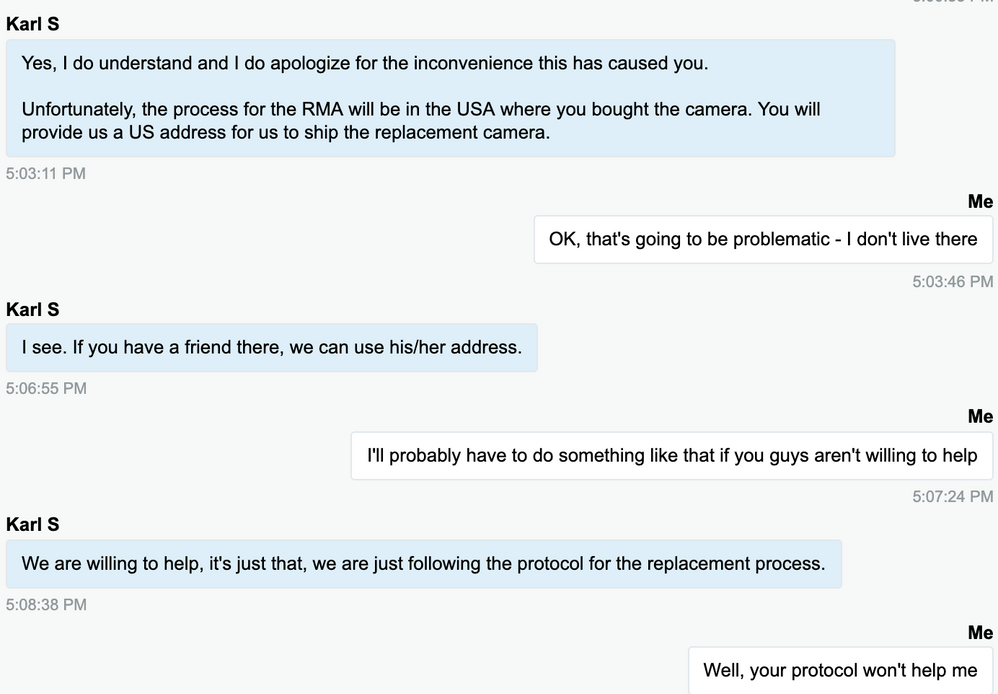 No manager anywhere in Arlo can do an RMA to a different address.

Arlo - take a leaf out of Amazon's book. Just do the easiest thing for the customer first; RMA the thing.

I have no inside knowledge, so take everything I say with a grain of salt. There may be differences between the US hub and those for other countries. Whether or not these differences would cause the cameras not to sync, I don't know. But being a Smartthings user, I do know that the Zwave frequency used in the US is illegal to use in the UK, Australia, New Zeland and other European countries as that frequency is reserved for the Emergency Responders, ( and possibly the police), and as you know, the Ultra smart hub has Zigbee and Zwave radios built in. If you can return this and get a refund, I think you would be better off with a hub designed for your country.

Good luck and let us know how things turn out.

the other thing I forgot to mention is that the latest firmware updates could be causing the problem. You could wait a couple of days and see if the problem corrects itself.

Thanks for replying. I should’ve mentioned - the Hub is a UK model (has to order it so I could use the Ultra). Have tried your reset method a few times now in various guises- no luck for me
0 Likes
Reply
Message 7 of 21
3,092

Aspirant
Yeah, I know the ultras support is new so I’m really hoping this can be patched via software.
0 Likes
Reply
Message 8 of 21
3,091

Apprentice
Hi.
Do you have the camera(s) fairly close to the hub when syncing ?
If you go into the add camera through the app, I find I dont need to press sync on the base for the Ultras, just pull the battery, then insert when told, set it to 'find' and then press sync under camera. Flash rate should change when it syncs up.

Final thought: Make sure cameras are charged. If the battery is low, it may light up when batt is inserted , but not sync.
0 Likes
Reply
Message 9 of 21
3,059

@DamianR yeah - cam is basically atop of the Smart Hub. Saw the flash rate thing work once (before that wonky update), but it doesn't seem to do that anymore (which is why I'm thinking hardware/failed update is the culprit).

I will reach out to you in a private message to gather more information on this issue.

@JamesC  don't suppose you had any updates?

Aspirant
You deleted your post mysko but sounds like what happened to me. Support got back to me today and said that Engineering have confirmed the hardware needs to be returned.
0 Likes
Reply
Message 15 of 21
2,920

Guide
I am also having issues with one of the Arlo Ultra camera not syncing to the Smart Hub. I have tried everything but through it in the trash and that seems to be all they are good for !
0 Likes
Reply
Message 16 of 21
2,909

Must be nice to be independently wealthy.

Guide
@jguerdat.. my point was, these are meant to be security cameras. They aren’t reliable and not worth the money when compared to hardwired cameras.
Oh... and this is the arlo community not Facebook! If it makes you feel better, yes it is fantastic to be financially independent.
0 Likes
Reply
Message 18 of 21
2,891

@JamesC So according to the case (support case #40804688) I have on the go, Engineering have asked the camera be returned for an RMA.

I've provided a return US address (because you guys seem to be inflexible about sending the new camera to where I actually live - Ireland). But nothing on the case yet in terms of where I'm supposed to send it to, despite pinging for an address or some kind of update as to where to send this broken camera to. Can you please help hurry this along? Tired of sitting on a broken camera for more than 2w now.

FINALLY got an RMA form. Page is broken though. Charged 30 quid for a next day replacement, but none the wiser as to whether it went through or not - form submitted and then wiped everything, but card charged. Who knows...

Guide
I was having exactly the same problem Trying to setup the 2 camera system via my iphone and support couldn’t help me fix it. I ended up solving the issue by setting it up via the website. I don’t know if it was a combination of factors like resetting the base and/or channel on my 2.4Ghz wifi but it worked. The website still said the firmware update was rejected by the camera but the lights on the camera were flashing blue and amber so I let it go. For one camera, I had to try and update a second time but it also updated even though the website said it failed. A simple refresh of the screen after you here the camera click and the lights stop flashing and I was up and running. Now the iPhone app works so far.
0 Likes
Reply
Message 21 of 21
2,381
Related Labels
Discussion stats